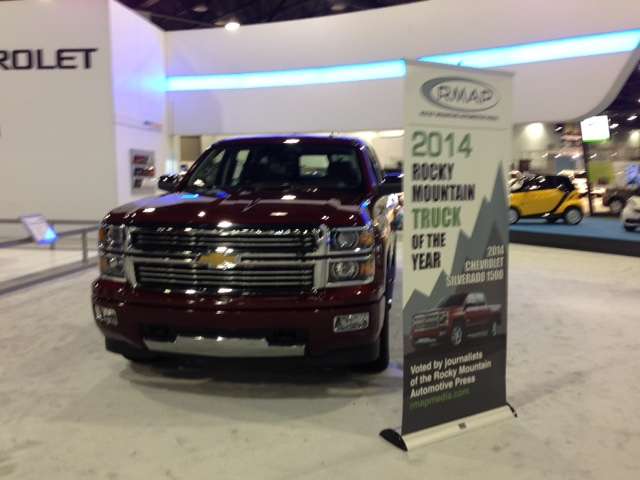 Owners of 2014 Chevrolet Silverados are taking action trying to force General Motors to either recall their trucks or reimburse owners for the persistent problems with their air conditioning. Thousands of owners have reported problems and the condensers to fix the air conditioning are on back order.
Advertisement

When the 2014 Chevrolet Silverado was voted Rocky Mountain Automotive Press Pickup Truck of the year, no one could have known that down the road the truck would develop huge problems with its air conditioning system. I’ve written two articles about the problems and they consistently draw the most comments. Now 2014 Chevrolet Silverado owners are asking the Federal Trade Commission to step in and force a recall.

I detailed the problems with the air conditioning in both 2014 Chevrolet Silverados and GMC Sierras last month and also in October of 2016. Instead of air conditioning the vehicles start blowing hot air. Dealers are charging around $1000 to put in a new condenser to fix it. Owners say it is a faulty design and General Motors should be expediting the repairs.

An owner named Matt recently posted a comment on one of my stories. “Just called Federal Trade Commission, they were very surprised to hear there is no recall. Number is - 1-877-382-4357. Please give them a call and file a complaint.” Matt’s complaint is very similar to others I’ve heard. Matt writes, “The A/C unit went, now a national back order. Dealer said when it gets here it gets here, GM said call the dealer to find out when. There aren't even any after market condensers to get. Just how many vehicles are affected by this. I do know it covers Silverados between 2013 and 2016, I imagine it affects GMC also's. I've been waiting since April 2017 with 3 vehicles in front of me at the dealer.” Matt says he has also contacted a lawyer about a potential class action suit.

Scott W. speaks for a lot of owners when he commented on my story. Scott also bought his truck new in August of 2013. “I am sitting at 30 days since the part was ordered. As with everyone else I placed complaints to the dealership and GM customer service. I am in Tucson AZ which will average 100 degrees until the end of September. It is absolutely ridiculous that GM has not fast tracked design-engineering to create a resolution. Last time I checked they are one of the largest manufacturers on the planet. I also thought that with the large truck segment and loyal buyers, GM would step up and create solutions. I am shocked that they have not released a statement for dealers to explain what action they are taking. When you spend $50k on the new truck...you have very high expectations. GM, you are losing good customers!!”

Freddy M. commented on my post, that he, too, is fed up. “I also bought a brand new 2014 GMC Sierra that the AC went out on. I have already spent several hundred dollars to re-charge the unit and for new hoses only to have it all leak out the first day after. I have since ordered a new condenser unit that has been on BACK ORDER for over 3 months and still no news on when it will ship. I will assume that this back order is due to the ongoing problems with this particular condenser and the overwhelming need for them due to their poor design. GM should definitely step up and take care of this obvious problem with this particular condenser unit. It's probably going to cost me close to $1,000 out of my pocket and I have been without my truck for 3 months and still waiting.... I have been a loyal GM fan my whole life, but it might be time to start looking at other brands.”

An owner named Craig posted a response that he received from General Motors. “Hello Craig, Thank you for following up with us. I certainly understand how stressful this situation is for you and I do apologize for the delay you're experiencing with parts. I can confirm the condenser is on national backorder. GM is working with two suppliers in order to alleviate this backlog for customers and are filling orders as quickly as possible. Unfortunately, there is no ETA for delivery at this time. If you'd like, we'd be glad to connect with your dealership just to make certain your part is ordered and formally document your concerns in our system. If this is of interest, feel free to send us your contact information, dealer name, and current mileage. Jasmine GMC Customer Care. Been a month so far waiting for a new condenser, I agree that this may well be the last GM truck I own, my last truck was a 2012 GMC Sierra and had air conditioner problems and now my 2015 GMC Sierra, get it together GM!”

One of the problems in mandating a recall is that typically federal agencies only require companies to recall vehicles if there is a risk of danger to the driver or passengers. A lack of air conditioning is uncomfortable but may not rise to the level of danger in all circumstances. It is surprising to me that General Motors hasn’t stepped up to fix such popular and important vehicles for the automaker.