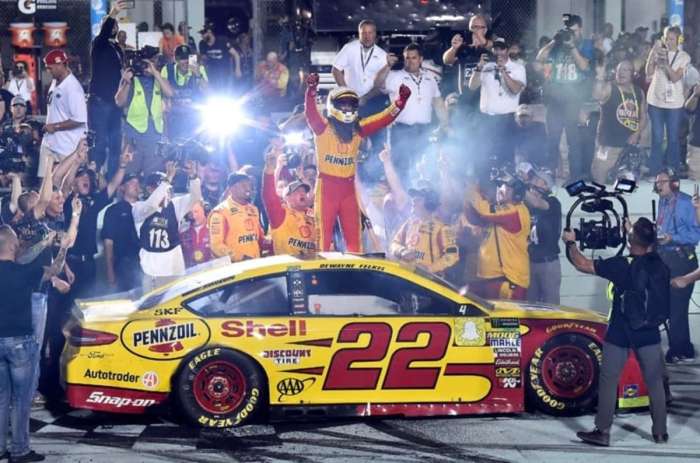 Joey Logano surged ahead at the end of the race, at the Homestead track, to take the Monster Energy NASCAR Cup Series Championship.
Advertisement

After ten years of trying, Joey Logano is finally a NASCAR champion. It all happened in the last 20 laps of the race in Homestead, Florida, as Logano surged ahead of Martin Truex Jr. for the lead and held it to the finish line. Logano claims the Monster Energy NASCAR Cup Series Championship for Ford and Team Penske. Ford also wins the NASCAR Manufacturers Championship.

Logano’s opportunity to drive the No.22 Shell/Pennzoil Ford Fusion was a second chance of sorts, Logano had been let go by Joe Gibbs Racing in 2012. Roger Penske agreed to take him on with Team Penske and Logano used his second chance to race into the history books.

Edsel Ford II was in Victory Lane representing the automaker. He was elated at the win. It was a big moment for the automaker that is phasing out the Ford Fusion as the race car and transitioning to the Ford Mustang for next year’s race car. “It means a lot to me personally to have both the drivers’ and manufacturers’ championship. It has been since 1999 and I was there with Robert Yates and Dale Jarrett. Doing it again, 19 years later, it is absolutely indescribable to me.”

The reporter in Victory Lane was not able to get to team owner, Roger Penske, before he left the stage.
Logano kept thanking his team and pit crew for the win. “I am so proud of everybody for rising to the occasion. We executed down the stretch like nobody’s business. I have to thank everyone that supports us. Shell and Pennzoil, SKF, Ford. We got Ford not only the driver’s championship but the manufacturers’ championship. I can’t wait to break that Mustang out.”

Logano is 28, which is young for winning the championship series. He is married to his childhood sweetheart, Brittany. Their first child, Hudson Joseph was born in January of 2018.

Winning the National Association for Stock Car Auto Racing Championship is a proud moment for any automaker but may be especially important for Ford this year. The automaker has announced that it phasing out most sedans as it focuses on more SUVs, crossovers and trucks, while it tries to jumpstart its autonomous driving operations. The Blue Oval can take pride in proving that it can build and deliver performance vehicles as well as great trucks and crossovers.

For Joey Logano, the win is personal vindication. “Man, I worked my whole life to get here. To win a championship. We have been so close. It has been 10 seasons of fighting for this. I wasn’t sure we were going to get it but Todd made a good adjustment at the end and we had that no quit attitude. It came down to the short run and we are champions. NASCAR champions!”

Ford had several strong contenders coming in to the last race of the season. Both Edsel Ford and Joe Hinrichs, Ford’s Presidents of the Americas, were on hand for the win.

The teams will have some downtime now before they will resume testing, in preparation for the first race of the 2019 season. It all kicks off with the Daytona 500 February 17, 2019.