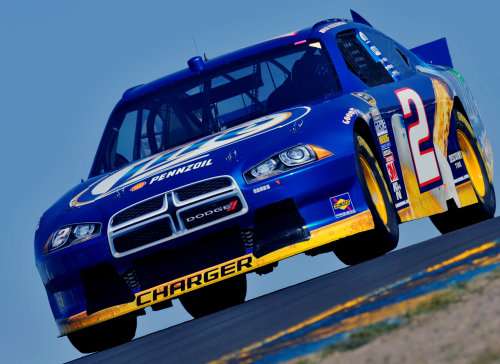 Just a few days after Penske Racing Dodge Chargers finished a disappointing 32nd and 34th in the 2012 Daytona 500, Ford Motor Company issued a statement proclaiming that Penske would be returning to Ford Motorsports for the 2013 season – both for the NASCAR Sprint Cup and NASCAR Nationwide Series.
Advertisement

Penske Racing was the last major multicar team left still running Dodge Chargers in NASCAR’s Sprint Cup Series as well as having a pair of Dodge Challengers running in the NASCAR Nationwide Series but when the 2013 NASCAR starts in February next year, all of the Penske team cars will be based on the new Ford Fusion race car.

“It was important to get this agreement in place early so that we can plan ahead for the debut of the new 2013 NASCAR Fusion,” said Jamie Allison, Ford Racing director. “We will work with Roush Fenway on the final development of the new car during this season, but we want to be able to have our teams building their new cars for the 2013 season before the end of the year, as the transition to the new body is taking place. With the operations and technology resources Penske brings from all forms of racing, we know they will be a strong addition to our program, and we look forward to working with them and all our teams to create a stronger Ford NASCAR program with even greater depth.”

This is great news for Ford Motorsports, who has now secured yet another multicar team with a very long and successful history in the world of NASCAR racing. Ford has seen their programs attract several ex-Dodge teams including the one run by Mopar racing legend Richard Petty and with the addition of one more major team with two young, promising drivers – things are only getting better for the Ford camp.

However, Penske Racing joins a long list of teams that have left Dodge Motorsports for greener pastures in the past few years and in losing the last multicar team, this could be the beginning of the end for the Dodge Charger in the NASCAR Sprint Cup Series. The only other Dodge Charger to qualify for this past weekend’s Daytona 500 (that was actually run on Monday), was Robby Gordon, who both owns and drives for the #7 Speed Energy Dodge Charger. Gordon finished 41st in the Daytona 500, having blown an engine early in the race. Sadly, if Dodge is unable to secure another team that can put the Charger at the front of the field, we could be looking at the end of Dodge and Mopar in the NASCAR ranks. The good news is that the #2 and #22 Penske Racing Chargers will continue to run throughout the 2012 season so if they do well enough – perhaps they will entice another team to go with Dodge for 2013.

After the announcement was made by Ford Motor Company welcoming Penske Racing for 2013, Chrysler Group Motorsports President and Ralph Gilles issued the following statement:
"Dodge has enjoyed a successful partnership with Penske Racing for 10 years. It's a partnership that has produced results for both parties on and off the track. Roger (Penske) has made a business decision to accept an offer with another manufacturer. We wish Roger and Penske Racing much success in the future.

We are committed to work with Penske Racing to compete at the highest level, win races and contend for championships this season.

Our motorsports involvement isn't limited to NASCAR. We do value our NASCAR program and will be evaluating the opportunities available moving forward. As those opportunities materialize, we'll reveal our 2013 plans, not only in NASCAR but in other forms of motorsports."

While nothing is set in stone, this could be the final nail in the coffin for in which Dodge’s NASCAR hopes are being sealed. While all three of the Dodge Charger drivers who attempted to qualify for last weekend’s Daytona 500 made it into the field, those three drivers finished 32nd, 34th and 41st in what was a remarkable crashfest of a race. Right now, the only driver that Dodge has for 2013 is Robby Gordon – if he stays with Dodge.