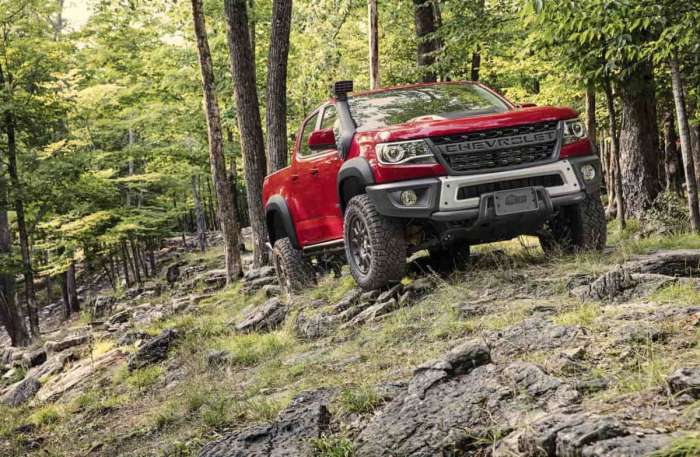 Could the 2019 Colorado ZR2 Bison be Chevy's Ranger Raptor Fighter?

Chevrolet is out with a special new trim package aimed at the off-road mid-size trucks like the Toyota Tacoma TRD Pro and the recently confirmed Ford Ranger Raptor.
Advertisement

Serious off-roaders may find the last line of the Chevrolet press release for the 2019 Chevrolet Colorado ZR2 Bison the most interesting. “The 2019 Colorado ZR2 Bison goes on sale in January 2019, modified for extreme off-road use and backed by a full factory limited warranty.” Chevy is promising that the new mid-size truck comes factory ready for “extreme off-road use”. The extra protection is thanks to a new partnership with American Expedition Vehicles (AEV).

The new Colorado ZR2 Bison will have factory installed steel bumpers and five different skid plates to protect the undercarriage from off-roading damage. The 2019 Colorado ZR2 will go barreling into the mid-size off-roading truck market currently controlled by the Toyota Tacoma TRD Pro. Ford recently confirmed that they will build a Raptor version of the highly anticipated Ford Ranger mid-size. Torque News writer John Goreham has a number of articles able the all-new Ford Ranger.

The 2019 Chevrolet Colorado ZR2 Bison is Chevy’s first collaboration with American Expedition Vehicles (AEV), which is a well-known premium off-road aftermarket manufacturer. It would make sense that if this vehicle is successful, you can expect to see a Silverado AEV version and perhaps an SUV version, as well.

Chevrolet offers four different versions of its mid-size Colorado truck. It offers a diesel, a V-6 gas engine, a ZR2 off-roader and now the Bison extreme off-roader. No word yet on how the extra equipment will affect fuel economy.

Sandor Piszar, who oversees marketing for Chevy Truck says, “More and more enthusiasts are discovering that Colorado is ideal for off-roading, especially overland travel. The Colorado Z71 offers a full suite of off-road equipment, the maneuverability of a midsize truck and the driving range of a class-exclusive diesel engine. The Colorado ZR2 offers even greater off-road capability with class-exclusive front and rear locking differentials and Multimatic DSSVTM dampers. And now, Bison offers customers an even more extreme turnkey off-road truck ready to tackle your next adventure.”

The Colorado Bison features 31-inch Goodyear Wrangler Duratrac off-road tires. The fender flares are larger to provide better maneuvering. There will be “Bison” decals on the bed sides, an “AEV Bison” logo on the tailgate and embroidered AEV logo floor liners and front head restraints.

“We’ve been following Colorado since its introduction, and the ZR2 really captured our attention,” said Dave Harriton, founder and president of AEV. “As this is the first Chevrolet vehicle we’ve given the AEV treatment to, we wanted to do something special with the industry’s first use of hot-stamped Boron steel. We also expect that Colorado drivers will love the added ruggedness of our front and rear bumpers on ZR2 Bison.”

The ZR2 Bison features all of the equipment on the ZR1 version and more including:

Serious off-roaders can even send their vehicles to AEV and have them install a snorkel, for a fee, for driving the dusty or muddy trails.

I would expect that Chevrolet will soon announce an AEV version of its popular Silverado to better compete with the Ford F-150 Raptor and the Ram Rebel. Off-roading appears to be a hot market for trucks right now and it only makes sense to strike while the skidplate is hot!