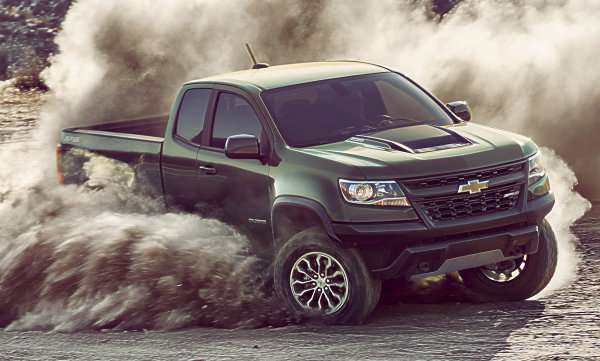 The big news from Chevrolet at the ongoing LA Auto Show is the debut of the new Colorado ZR2 – a midsized pickup designed to conquer the nastiest off-road situations featuring the first application of a high performance suspension setup previously reserved for supercars and race cars.
Advertisement

A few years back, General Motors introduced the Chevrolet Colorado ZR2 Concept and with the start of the 2016 LA Auto Show, the production version of the Colorado ZR2 makes its public debut, looking a great deal like the popular concept truck. Best of all, to help make the Colorado ZR2 the most capable truck in the midsized segment when it comes to off-road abilities, Chevrolet has fitted it with a shock absorber design from the Chevrolet Camaro Z/28, the new Ford GT and the Aston Martin One-77.

Oh, and you can get the Colorado ZR2 with diesel power.

Colorado ZR2 Exterior Design
Like the 2014 Colorado ZR2 Concept, the 2017 Chevrolet Colorado ZR2 that will be available at your local Chevy dealership has a very unique look compared to the rest of the family. This includes a hood with a contrasting, raised center section, a unique grille with the ZR2 badge and a front bumper that allows maximum approach angle and plenty of clearance for the big off-road tires. The front bumper design is very minimal compared to most modern fascia designs, but the open corners will make the Colorado ZR2 more capable in the roughest conditions while the integrated skid plate will protect the engine from rocks and other debris.

Along the sides, the Chevrolet Colorado ZR2 wears unique 17 inch wheels wrapped in 31 inch mud tires which, when combined with the high performance suspension setup, creates a track that is roughly 3.5 inches wider than the rest of the Colorado lineup. This wider track is contained within the flared wheel openings and standard rock rails protect the bottom edge of the body between the wheels.

Supercar Suspension
The most significant components of the 2017 Chevrolet Colorado ZR2 package are the Multimatic Dynamic Suspensions Spool Valve (DSSV) dampers. Multimatic is a Canadian-based company that has spent years making high performance suspension setups for race cars around the world and more recently, they have started offering their DSSV dampers for very high performance road cars. The 5th gen Camaro Z28 featured Multimatic DSSV dampers, as does the new Ford GT, the Aston Martin One-77 and a handful of current Formula One race teams.

The same suspension technology which has made those cars some of the best-handling machines in the world has been adapted for off-road use and mounted behind all four wheels of the 2017 Colorado ZR2 – possibly making this the best factory off-road truck in America.

“From our experience on Z/28, we knew the performance advantages offered by DSSV dampers, “ said Mark Dickens, executive director, Performance Variants, Performance Parts and Motorsports Engineering, Chevrolet. “We also know that Multimatic’s motorsport development mentality would allow us to bring a uniquely precise and repeatable custom damper to market even more quickly than a traditional damper system.”

This damper system will allow the Colorado ZR2 to have remarkable grip when traversing the roughest off-road conditions while also being able to offer a smooth enough ride on paved roads for this sporty midsized truck to serve as a great daily driver.

ZR2 Drivetrain
The 2017 Chevrolet Colorado ZR2 will be available with two engine options – the 3.6L gasoline V6 with 308 horsepower and 275lb-ft of torque or the 2.8L Duramax diesel with 181 horsepower and 369lb-ft of torque. Both of these engines are mated to the GM 8L45 8-speed automatic transmission and the advanced four wheel drive system featuring front and rear electronic locking differentials.

ZR2 Vs the Competition
Based on what we know about the 2017 Chevrolet Colorado ZR2, it seems as though this will be the most off-road capable truck in the midsized segment, with the only real competition being the Toyota Tacoma TRD Pro. Click here for a closer look at how the Colorado ZR2 lines up against the Tacoma TRD Pro.

The ZR2 might be able to conquer the same terrain as the new Ford F150 Raptor, but with the F150 packing a 450hp EcoBoost V6, the Raptor still has a clear advantage in power. Of course, the Colorado ZR2 will likely cost far less than the Raptor, and should that be the case, this new Chevy could prove to be an awesome alternative to the F150 for someone shopping for a great off-road truck on a budget.