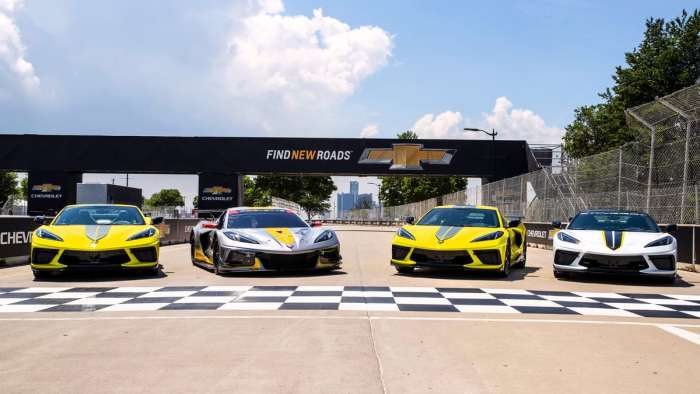 The Corvette Racing Team will be back on Belle Isle, this weekend, as part of the Detroit Grand Prix. Chevrolet has designed a 2022 Special Edition Stingray to honor the team's success.
Advertisement

Chevrolet had a banner year, in 2020, with its Corvette Racing team sweeping IMSA’s sports car championship series. It was the mid-engine Corvette C8.R’s inaugural season, and the team captured six victories and seven pole positions. Corvette Racing won the Manufacturers, Drivers and Team titles. To honor that incredible winning season, Chevrolet is releasing a 2022 Corvette Stingray IMSA GTLM Championship Edition. IMSA stands for the International Motor Sports Association and GTLM is the GT Le Mans division, it refers to the type of cars that race in the category.

Corvette’s race car drivers drove the new special editions on to the Belle Isle race track, escorted by one of the real Corvette C8.R race cars and the Corvette Stingray convertible that will be pacing the 2021 Detroit Grand Prix.

“Racing has been part of the Corvette’s DNA from nearly the beginning,” said Laura Klauser, General Motors Sports Car Program manager. “Both the Corvette Stingray and C8.R have seen tremendous success capitalizing on the benefits of a mid-engine platform – and we’re just getting started.”

Chevrolet plans to release just 1,000 of the special edition Corvettes

The special editions are painted to resemble the No. 3 and No. 4 Corvette C8.R race cars. According to the Chevrolet description, “The 2022 Corvette Stingray IMSA GTLM Championship Edition is based on the 3LT trim with Z51 Performance Package. Each car includes Corvette Racing-themed graphics packages. Accelerate Yellow No. 3 editions feature gray graphics and Hypersonic Gray No. 4 editions feature yellow accents.” There are several other special features including a high-wing spoiler, yellow brake calipers and race car inspired seats and interior. The special edition package starts at $6,595 and should push the price of the 2022 Corvette Stingray to over $85,000.

The Corvette Stingray’s LT2 6.2L V-8 engine gets 490 horsepower and the Z51-equipped model can do 0-60 mph in 2.9 seconds. The 2022 Chevrolet Corvette will go into production at the Bowling Green Assembly plant late in the third quarter.

This is the first time that the Chevrolet mid-engine Corvette C8.R will race on Belle Isle as part of the Detroit Grand Prix weekend. The Chevrolet Sports Car Classic race is scheduled for Saturday, June 12, at 5pm ET on NBCSN.