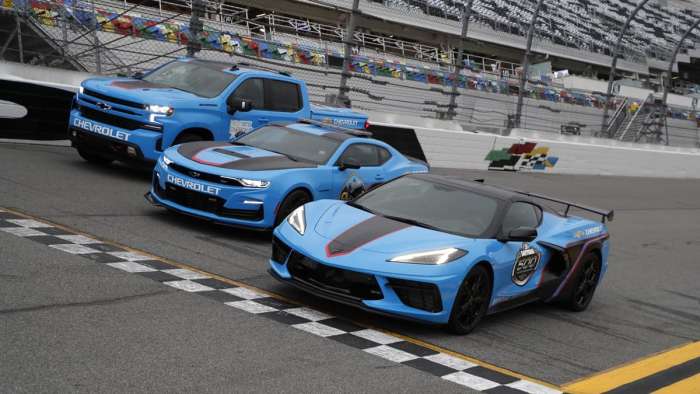 For the sixth time in history, a Chevrolet Corvette will pace the field for the start of the Daytona 500. Find out why there is a special connection between the vehicles pacing the three major races in Daytona this year.
Advertisement

Speedweeks are underway at the Daytona International Speedway and we are almost back to major racing! The Daytona 500 traditionally kicks off the start to the NASCAR season and that will take place on Sunday, February 14th, 2021. A stunning Rapid Blue 2021 Chevrolet Corvette Stingray will serve as the pace car for the Great American Race. The mid-engine Corvette is powered by a LT2 V-8, which produces 495 horsepower and 470 lb-ft of torque with the Z51 performance package – the most horsepower and torque for any entry Corvette.

The 2021 Chevrolet Camaro SS 1LE will lead the Xfinity Series’ Beef. It’s What’s For Dinner. 300 race. The Xfinity race takes place on Saturday, Feb. 13, and features many of the same drivers that will compete in the 500. The 455-horsepower LT1-powered 2021 Camaro SS 1LE has a high-performance package with magnetic ride control and great cornering capability.

Each of the Chevrolet pace vehicles is powered by a version of Chevy’s 6.2L small block V-8 engine. Chevrolet's three pace vehicles will produce a cumulative 1370 horsepower.

“Coming off of a successful 2020 on track in all three NASCAR national series, our drivers and teams are fired up and looking to put Chevrolet back in Victory Lane, starting at Daytona,” said Tony Johnson, director of Chevrolet Car and Crossover Marketing. “In addition to exciting green-flag racing, we’re really looking forward to showing off the Daytona 500 Corvette Stingray pace car and so much more for race fans Saturday during the ‘Live from Daytona’ broadcast presented by Chevy MyWay.”

Chevy is starting a virtual broadcast highlighting Team Chevy as well as interesting vignettes about the history of racing, especially at Daytona. The broadcast will present a behind-the-scenes look at Daytona and the technology used in current Daytona races. “Live from Daytona” will showcase the rare GM Firebird I concept and highlight the history behind the Harley J. Earl trophy. The broadcast will compare the Camaro ZL1 1LE street and NASCAR Cup Series cars. It will also feature the 2021 mid-engine Corvette Stingray pace car. The 20-minute free show will start airing on Saturday, Feb.13th, on Chevrolet.com/myway.

Tsingshan's Threat to Tesla: EV Maker Is In Battery Crosshairs
Tesla-Funded Research Reveals One of The Biggest Mysteries of EV Battery
END_OF_DOCUMENT_TOKEN_TO_BE_REPLACED