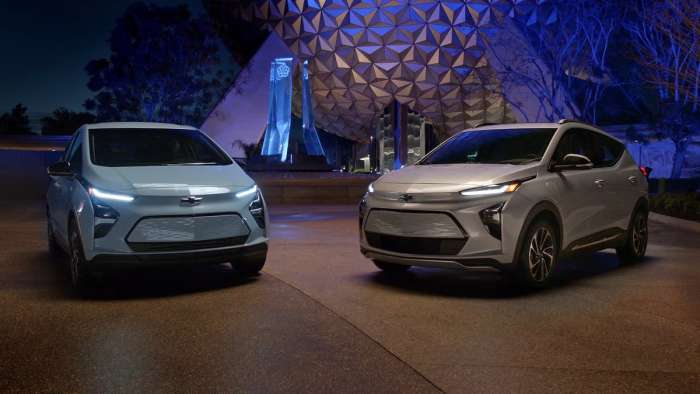 Chevrolet used a little Disney magic to reveal its all-new 2022 Bolt EUV. It also has conjured up a redesigned 2022 Bolt as it strengthens its commitment to electric vehicles.
Advertisement

Chevrolet is using a little Disney magic to unveil its all-new 2022 Chevrolet Bolt EUV. The electric utility vehicle is a new member of the Bolt family. Chevrolet also is unveiling a redesigned 2022 Chevrolet Bolt. The original Bolt has been on sale since 2016. Both the 2022 Bolt EUV and 2022 Bolt are scheduled to be available this summer.

The 2022 Chevrolet Bolt EUV is larger than the original Bolt and will have more high-tech features. The Bolt EUV will have General Motor’s Super Cruise hands-free driving technology and also have an HD rear camera mirror. Those two technologies have typically been reserved for higher-end vehicles like Cadillacs and the larger SUVs and trucks. Well-known Disney characters like Tinker Bell, Haunted Mansion’s Hitchhiking Ghosts, a Star Wars X-Wing Fighter and Dumbo the Flying Elephant will make appearances in a new advertising campaign, illustrating the Bolt EUV’s news features.

“The power of two iconic brands like Disney and Chevy coming together to reveal the Bolt EUV inspires customers to imagine an all-electric future,” said Steve Majoros, vice president of Chevrolet Marketing. “We want to engage and inform consumers about all the benefits of owning an EV and do it in an entertaining way. These vehicles are fun to drive, loaded with technology and are affordable, proving EVs are for everyone.”

“Our Alliances creative team has produced amazing content that fuses the anticipation and magic of a visit to Walt Disney World Resort with the excitement of driving the new Bolt EUV,” said Tiffany Rende, senior vice president of Marketing Partnerships and Alliances at The Walt Disney Company. “The result is an unforgettable campaign, amplified across Disney’s ecosystem, that we know will resonate with consumers.”

Chevrolet and Disney also made a longer “Behind the Magic” video about the collaboration. Much of the footage for both the video and the advertisements was shot in Florida at Walt Disney World’s Magic Kingdom and EPCOT. Obviously, the new advertisements are great for both Chevrolet and Walt Disney World. The cross promotion should help the resort stir up business after the pandemic has forced most families to stop traveling. Families will love the idea of a vehicle being magically cool because it is electric. Dumbo and Tinker Bell make everything fun!

Tsingshan's Threat to Tesla: EV Maker Is In Battery Crosshairs
Tesla-Funded Research Reveals One of The Biggest Mysteries of EV Battery
END_OF_DOCUMENT_TOKEN_TO_BE_REPLACED