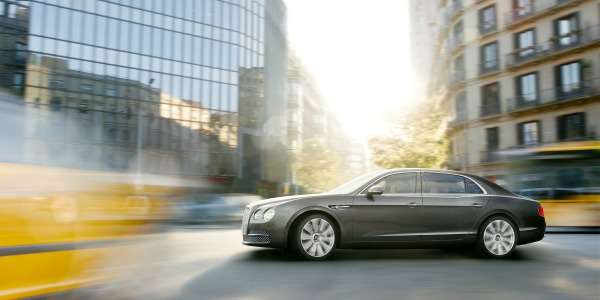 Over one million Russians agree: Bentley Flying Spur is the most luxurious ride in the land.
Advertisement

The Bentley Flying Spur has been named “Car of the Year in Russia.” The prestigious honor went to the high-performance luxury sedan in the competition’s premium sedan category. Over one million Russians voted online to put the Bentley at the top.

The on-line poll awards favorites each year when members of the public cast votes for competitors in several categories. In this 14th year of the event, the Bentley Flying Spur was nominated for the fifth consecutive year; the luxury sedan has won the premium category consecutively since 2010. The brand believes they have offered customers a new benchmark in luxury sedans since unveiling the new Flying Spur at the Geneva Motor Show in 2013, with a blend of effortless driveability, exquisite luxury and craftsmanship, sculpted design and state-of-the-art technology. Richard Leopold, head of Bentley in Russia, commented on the success of the new Flying Spur:

The new Flying Spur has enjoyed tremendous success across the globe and in Russia, which continues to be a key market for the Bentley brand. Our current model range as well as the expansion of our dealer network will ensure solid growth in the region this year. We thank the Russian public for naming the Flying Spur as their car of the year and are honored to receive this important award.

Powered by Bentley’s renowned 6.0-liter, twin turbo W12 engine, it develops 625 PS, zooming from 0-100 km/h in just 4.6 seconds; not surprisingly the Flying Spur is the fastest road-going luxury sedan in the world.

Complementing the Flying Spur flagship W12, the V8 model provides drivers with the exciting and satisfying opportunity to experience the Flying Spur’s blend of performance, craftsmanship and technology with an enhanced touring range. Bentley’s renowned 4.0-liter twin-turbo V8 engine develops 507 PS and 660 Nm of torque, powering the Flying Spur V8 to 100 kph in 5.2 seconds and on to a top speed of 295 km/h. This performance comes with an extended fuel range of more than 840 kilometers.

During the first quarter of 2014, sales for Bentley grew by 20% in Russia, and the company has set lofty goals for sales growth in the region, as well as plans to introduce the new model Flying Spur V8. They plan to significantly expand the dealer network, as well, with a new showroom in Yekaterinburg opening just last week, and plans to add further Bentley locations by the end of 2014.