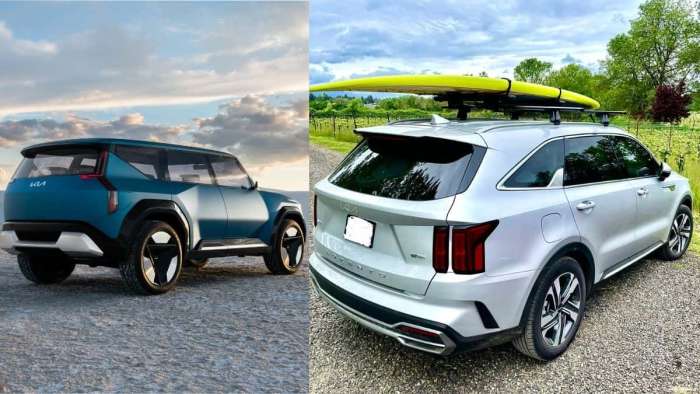 I recently saw some spy shots of a camouflaged Kia EV9 out and about in the real world, which is exciting news. It made me think: what if I had the opportunity to take a road trip in an all electric EV9? How would it be different from the same road trip in a 2022 Kia Sorento Plug-in Hybrid (PHEV), the closest electrified vehicle Kia currently sells to the EV9?
Advertisement

This past weekend, I returned from an 8 day, 855 mile road trip from the Seattle suburbs to the Oregon Coast and back through Willamette Valley wine country in my Kia Sorento PHEV. I was able to cover over 200 miles of the trip without using any gas as I was able to charge our PHEV where we were staying and at one place we visited while on the coast. That comes out to around 25% of the total miles we drove on the trip, which is not too shabby. If we had been driving the yet to be released EV9, supposedly capable of over 300 miles of range on a full charge, the experience would have been at least a little different though. I’m going to plot out the same course, look at the currently available charging infrastructure, make some assumptions about what the EV9 will be capable of (based on the currently on sale Kia EV6), and also use the same cargo and passenger loads and routes we took in my Sorento PHEV.

The first day of driving was just over 223 miles, but loaded down with about 750 pounds of people and stuff and a stand up paddle board strapped to the roof racks. In theory, the EV9 would have been able to make that distance on one full charge, though experience tells me that the weight and additional wind resistance from the load on the roof would have reduced the range a little bit, not to mention the steep hills along the Oregon coast. But my Sorento PHEV managed to get over 37 mpg (gas and electric combined) getting to our vacation rental home, which is probably no worse than 10-15% lower fuel economy had I been driving with less weight, wind resistance, and on flatter ground so I’m willing to assume that similar would be true for the EV9 and we would have made it with about somewhere near 40 miles of range to spare. Had that not been the case though, we would have needed to stop for a fast charge (see the PlugShare screenshots below). 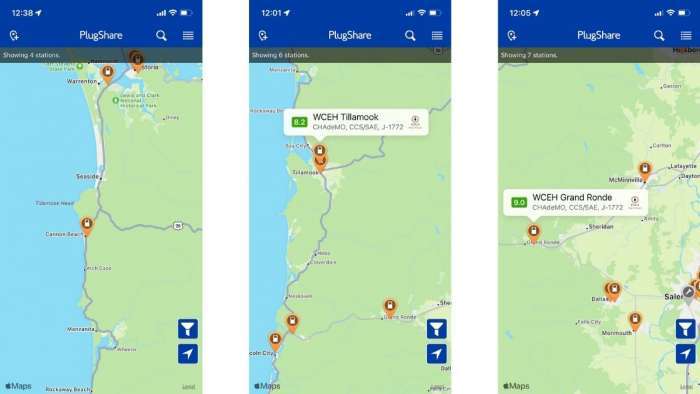 We would have had to make a stop for somewhere between 10 and 20 minutes to recharge, most likely at a CCS “fast charging” 480V station, near Warrenton or Cannon Beach, the two closest CCS stations on the route to our destination in Rockaway Beach, Oregon. The charger near Warrenton is capable of 350 kW output, and if the EV9 is capable of charging at 800V like the EV6 is, I could easily have gotten enough range in 10 mins or so of changing. However, if I chose to stop at Cannon Beach, the CCS charger there is only capable of 50 kW output, and even though it is only about 28 miles from there to our destination, I may have charged a little longer if I was very low on range and or just to be sure I had enough to get back to Cannon Beach or another CCS charger further south in case for some reason I couldn’t charge at the vacation rental we were staying at. But it turns out we were able to charge where we stayed at 12 amps, 110V.

In the Sorento PHEV, that meant it took about 11 hours to fully recharge the battery to about 32 miles of rated range (note that I consistently get 34-40ish miles of range per full charge since I tend to drive smoothly, accelerate gently, and stick pretty close to the speed limit). In the EV9, that same outlet would have added between 42 and 54 miles of range between drives. The longest we plugged in was between 14 and 18 hours continuously, though we would also have had additional time to charge between morning and afternoon day trips, so a total of more like 60-63 miles per day was possible. But if we rolled up to our vacation rental with only 40-ish miles of range, and drove exactly as we did while there in our Sorento PHEV, we would have hit a few snags or been cutting it close without making some extra stops for charging. Here’s why: on our first full day there, we drove a little over 80 miles round trip for some surfing and beach time. We would only have had about that much range if we didn’t stop at a CCS charging station on the way down, which of course we could easily have done when we stopped for lunch in Astoria (or nearby at least) though changing our preferred dining spot may have been required. So there’s the first difference: needing an extra stop to charge or altering stops for food (and or skipping a favorite place to eat/have a beer).

During the rest of the trip, we would have been fine with the 110V and 240V charing that we used each day on the coast, and on the day we departed for some wine tasting further inland, we would have been charged up to approximately 50% in the EV9, with about 150 miles of range. As such, we would need a fast charge to make sure we could get to our hotel at the end of the day and most likely we would have stopped in Tillamook, Oregon to use one of the 3 CCS chargers there and would have likely needed to stop for at least 20-30 mins (but possibly twice as long if we wanted to get closer to a full charge to make sure we had plenty of extra range for the next day’s outing in wine country). Alternately, we could have driven to another charger in either Grand Ronde or McMinnville, Oregon for an even longer CCS charging stop of likely 75 minutes or more (since the CCS chargers there are only 50 kW capable), or perhaps if we preferred to make another stop on the following day at the faster 150 kW charger in Sherwood, Oregon we could have kept our charge that day to only 30-45 mins. We also could have chosen a hotel or wineries that offered 240V charging and either topped off the battery, or gotten enough to cover the days drive, depending.

Finally, the drive home from Sherwood, Oregon to our home in the Seattle area was a little over 190 miles, which means we would have needed at least 70% of a full charge to make it all the way home (maybe more like 75-80%), to be safe. Depending on how we decided to charge in the two days of wine tasting we did prior, we would either have had to stop at a CCS charger before we got too far into our trip home (there are additional, faster 150 - 350 kW chargers in the Portland area), or we would have had to charge close to full the evening before we left, most likely. But we didn’t do most of that because we drove our Sorento PHEV and only plugged in to charge where we were staying and at the Tillamook Creamery. What do you think about the difference? Would the extra planning and stops in the EV9 be a hassle? Would you prefer the PHEV experience? Please leave any questions or comments below.