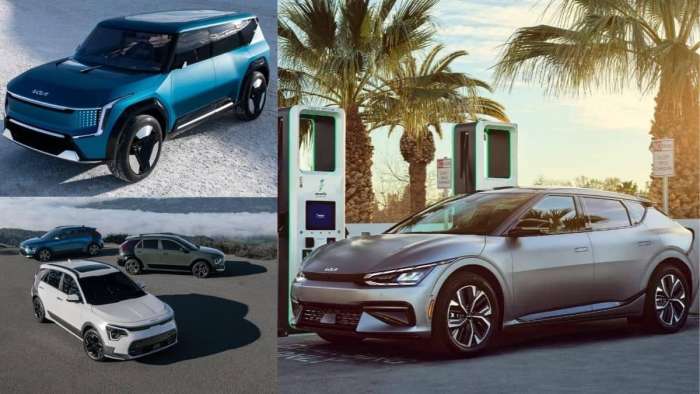 Last week at the New York International Auto Show (NYIAS), a Kia American executive confirmed in an interview with Green Car Reports that Kia is waiting to see what sales are like for the companies now selling or soon to be selling electric pickups in the U.S. This sounds perfectly logical, but it also begs the question: is Kia being coy?
Advertisement

I have to take the Green Car Reports interview with Kia American marketing VP Russell Wager at face value. Yet I also must assume that Kia is fully aware of the massive number of reservations already in place for virtually every automaker that has announced an EV pickup or already has one in production (which includes Ford, Rivian, Chevy, and of course Tesla). Assuming they are aware, and not averse to math, they should realize that the current demand for EV pickups in the U.S. market is somewhere between hundreds of thousands to millions, per year. If Kia could put an EV pickup on sale tomorrow they would have no problem selling every single one they could make. I say this for the sake of argument, because even if they could put one on sale tomorrow, they still would only be able to make somewhere on the order of tens of thousands of them annually as they simply don’t have battery supply to produce more than that. So I don’t actually buy what Mr. Wager said to Green Car Reports (GCR), exactly. I believe Kia is more likely being strategic in their utilization of their supply chain and taking time to think through exactly what kind of pickup to bring to market (which is kind of what “waiting to see what sales are like” means, but not exactly). This is clearly indicated in the opening paragraph of the GCR story, explaining that this pickup would “need to be an upscale model – not focused entirely around value and affordability – to make sense in America”.

I think that quote, and others later on the piece, says a lot. Kia isn’t planning on making a work truck or a “high-value, low-price segment” vehicle, it sounds like they’re going to build something for the lifestyle and or luxury truck market (think Rivian). That type of electric truck is likely to be about as expensive as the only other ones on the market now (the Rivian R1T and the GMC Hummer EV) and as such have a much smaller market than the work truck/high-value, low-price segment of the market. And again, I ask why would Kia do that? Battery supply. Take it from the CEO of Rivian, RJ Scaringe, the maker of the currently most “affordable” lifestyle electric pickup on sale today in an article from elektrek.co, automakers are about to face the grim reality of a battery shortage, as we are entering “the beginning of the end of fossil fuel-powered consumer vehicles”. There isn’t going to be enough supply to meet demand, there already isn’t, and even though supplies are ramping up, they aren’t ramping up fast enough and automakers that haven’t invested enough in securing their future supply of batteries will find themselves at a great disadvantage in a changing market.

But Kia is one of those automakers that is investing heavily in the transition to electrification. In fact, in the GCR story, Mr Wager said that Kia is “now the number-two EV seller in the U.S. (after only Tesla)” and that Kia has the allocation of its current EVs (the EV6, Niro EV, and next year’s EV9) to “keep up the pace and it has the support of its dealers to sell EVs”. Consider what this Kia executive just claimed: Kia is beating Ford, VW, GM and all the other brands currently vying to challenge Tesla and is in the number two spot already. This is because they have more EV models in production/nearing production than other larger companies and they have the support of their dealers (something that may be less true for other brands). I believe that Kia is only leading marginally though, and I also suspect that could shift by the end of this quarter or next with Ford’s F-150 Lightning going on sale and possibly with Chevrolet’s Bolt going on sale again, among others. It is profoundly impressive regardless if in the span of less than a year, Kia has surpassed all its other competitors save one. Though it is more like a sprinter taking a lead of a fraction of a second than a marathon runner leaving their competitors behind, it shows that Kia is unquestionably serious about being a leader in this change. Bravo Kia, bravo! Please leave your comments or questions below.