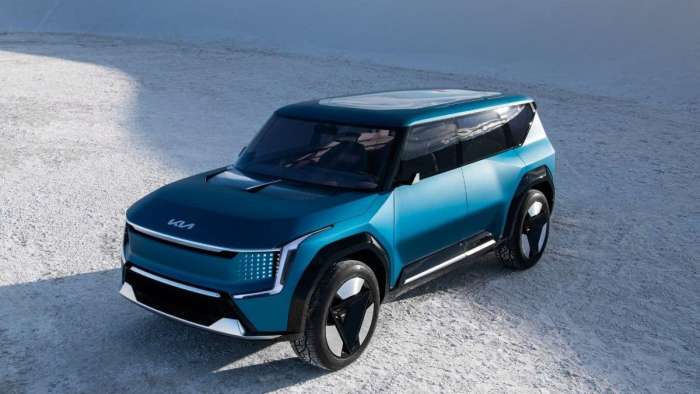 Last week, Kia held an Investor Day event and announced additional EV models for its 5 year roadmap, including not one but two pickups and an affordable “entry level” model as well. Note that Kia’s news refers to its global strategy and at least one of these models is intended for emerging markets (and as such would not likely be sold in the U.S. or Western Europe).
Advertisement

According to Green Car Reports, the 3 additional EV models will be part of Kia’s plans to launch at least two new EV models each year, starting in 2023. The EV6 is the first of the now 14 new models that Kia will debut over the next 5 years. The next Kia EV we are likely to see here in the U.S. will be the EV9, a large SUV which premiered at the 2021 Los Angeles Auto Show and will be Kia’s first vehicle to include Over-The-Air (OTA) update capability, with on demand driver selectable software features and a new driver assist system called AutoMode. According to Kia, AutoMode includes the “Highway Driving Pilot feature which would enable driving without driver intervention on highway sections.” This suggests it may offer more than Level 2 self-driving capabilities, at least in some places, but may not be a full level 3 system.

How much has Kia increased its EV production goals over the next 5 years with this announcement? According to an article published in 2021 by InsideEVs, Kia was planning to produce 579,000 EVs, globally, for 2026 (which equates to just under 15% of its targeted, total production for that year). With last week's announcement, the target for 2026 EV production now stands at 807,000 units, an increase of 228,000 more EVs. This represents about a 39% increase from the 2026 target announced last year, which is quite significant.

How does Kia plan to achieve this significant increase in BEV production targets over the next 5 years? Kia laid out their plan in detail. First, “the roles of individual production sites will evolve” with Korea as the global hub for R&D as well as production and supply, and other production facilities around the globe will focus on producing “strategic EVs for each market”. For example, in the U.S. this would mean electric versions of midsize SUVs and pickups would be produced locally, starting in 2024. Further, Kia plans to build a robust “battery supply and demand strategy” and further develop its battery technology in order to meet dramatic increases in demand for EVs, citing more than a 10x increase in battery production targets by 2030. Investing in its battery supply chain includes a joint venture in Indonesia and outsourcing to global battery companies, and it also includes plans to “increase battery energy density by 50% by 2030 and reduce system costs by 40%”.

What I find most interesting in Kia’s announcement from last week is the lack of specificity regarding PHEV and HEV production targets. Previously, I have reported on Kia’s plans to begin ramping down PHEV production after this year. There is no specific call out in their announcement that would contradict their earlier stance on gradual reduction of PHEV production volumes from 2023 forward, but Kia did mention that “...the company will also expand sales of eco-friendly vehicles (including BEVs, plug-in hybrid electric vehicles (PHEVs) and hybrid electric vehicles (HEVs)) through enabling and accelerating its electrification efforts.” This could mean Kia has reconsidered its plan to begin reducing PHEV volumes after 2022. However, I am more inclined to think that, besides their dramatic increase to EV production targets, what Kia really means is that they will also likely plan to produce more HEVs and haven’t specifically changed their PHEV production targets from last year. What do you think? Please leave your comments below.