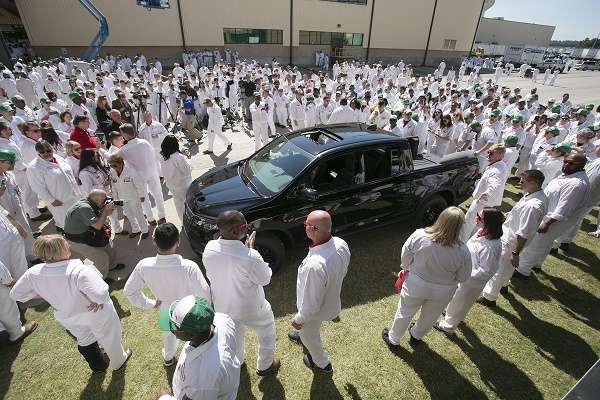 Good news for past and future Honda Ridgeline fans. Today, May 5, 2016 marks the birthdate of the reinvented Ridgeline -- hometown -- Lincoln Alabama U.S.A..
Advertisement

22 months has passed since the last generation 2015 Ridgeline SE pickup rolled off of the production line. Dealerships have long been sold out of Ridgeline, although one did show up on Honda’s April sales report.

American Honda Motor Division’s public relations manager James Jenkins comes to his new post with some major light truck chops. As former manager of product planning for light trucks, James brings a familiarity with 2017 Ridgeline that can only come from 4 years embroiled in its development.

3 days with 2017 Honda Ridgeline and James is a work out! Throw in the best looking, hardest working and most refined entry in the growing midsize truck segment, it’s exhilarating and inspiring.

James assures Torque News that Honda of Alabama has the manufacturing capacity to meet and exceed the pent up public demand for the new Ridgeline. And, that outside of unanticipated mega-demand, will provide timely dealership delivery to the satisfaction of 2017 Ridgeline buyers.

Honda management would not comment as to the annual Ridgeline production target as of this posting. However, based on what I witnessed and experienced in San Antonio, I expect 2017 Ridgeline sales to be record breaking fore the most unique, powerful, and fuel efficient Ridgeline in the brand’s history - and, the midsize truck segment (V6 gasoline powered) for that matter.

Honda Manufacturing of Alabama (HMA) employs 4,500 associates at its 3.7-million-square-foot Lincoln facility has the capacity to produce as many as 340,000 vehicles and engines each year. Over the past three years, HMA has invested more than $510 million and added 450 jobs in expansion efforts designed to enhance manufacturing flexibility and increase annual production. The Alabama plant is celebrating its 15th year of production.

With 2017 Ridgeline production in Lincoln on-line, we anticipate dealership of Honda’s only pickup offering before the first month of summer 2016, with an MSRP that's sure to please.

Bob Williams wrote on November 23, 2016 - 8:03pm Permalink
Is it possible to send me clear photos of a 2017 ridgeline in forest mist metallic. thank you.

LG's New EV Battery Plant Is a Welcome News for Tesla
Tesla Giga Berlin's New Hurdle: It's Not Only the Gov't, but Now Tesla Itself
END_OF_DOCUMENT_TOKEN_TO_BE_REPLACED