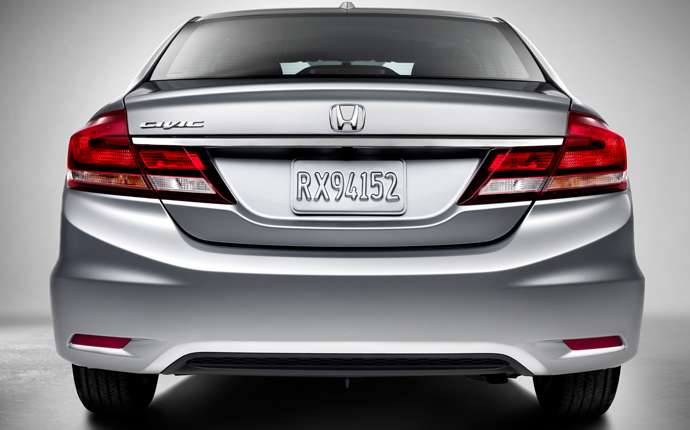 We reported back in March that the redesigned 2015 Fit was being positioned by Honda to replace the super sized compact Honda Civic. Our readers disagree.
Advertisement

The redesigned, sportier and better handling 2015 Fit utility hatch would eventually overtake and unseat the ever popular Honda Civic sedan. Our readers argued that Fit could not possibly replace the aging Civic concept based on volume sales alone. Several Honda Civic fans put Torque News through the proverbial wringer over this assertion. None the less, we shall press the argument.

Young drivers love the look and utility of Civic Sport Hatchback. Honda doesn’t produce one for the North America market. A petition to bring the Civic R Type to the U.S. has(to date) fallen on deaf ears in the halls of Honda. None the less, watching the unveiling of the 2015 Fit at the New York International Auto Show, Honda’s message was clear. The redesigned and more powerful entry level hatchback was targeting the Gen-Y demographic.

Over the years we’ve watched the Civic grow from a 2,000 lb affordable, fuel efficient and fun to drive car to the civilized 3,000 pound 4 door family ride that it is today. Sure, the Civic is available in several trim variants, including an Si Coupe; It’s a blast to drive.

But, with a starting MSRP of $22,790, this 205 hp pocket rocket doesn’t meet the needs of a growing young family or boardsports enthusiasts. For many prospective buyers, the grown up and much refined Civic Sedan ain’t cool with the Gen-Y crowd. That’s where the Fit comes into play.

A base Si Coupe or Sedan will cost you $2,000 more than a fully loaded 2015 Fit EX-L with satlink and navigation. Offering the utility and minivan haul characteristics of a hatchback, Fit averages 33 city/41 hwy while seating 5 adults in relative comfort.
Yes, you can by an entry level 2014 Civic for an MSRP of $18,390. Translation: Expect to spend $20,000 before walking out the door of your favorite Honda dealership, and it’s not a hatchback.

While Honda Civic will not be sent to the halls of Honda history anytime soon, Fit will continue to take market shares with a younger buying demographic. We expect Fit sales to approach Accord and Civic territory by mid 2015.

Matthew Johnson wrote on July 18, 2014 - 12:54pm Permalink
I do not think the Fit has a chance to outsell the Civic anytime soon. And certainly not by 2015. I base my analysis on facts. Just look at the Retail Polk Registration data. In 2013, there were only 625,251 Sub Small Cars registered in the entire USA. This is the segment in which the Fit competes. In 2013, there were 1,878,162 Small Cars registered in the entire USA. This is the segment in which the Civic competes. And In 2013, there were 2,037,063 Mid Size Cars registered in the entire USA. This is the segment in which the Accord competes. This data shows that the popularity alone of Small cars is 3x greater than Sub Small cars. And even greater for Mid Size cars. There were 51,476 Fits registered in 2013. And there were 329,190 Civics and 360,123 Accords! Just look and think about the production numbers! Even though Honda built the new factory in Mexico, it will not have the capacity or suppliers to compete with the Civic or Accord by 2015. And for the people that want to claim that the Sub Small Segment is growing, let's check! The newest Polk data, which is May, the Sub Small segment decreased 3.15% or 8,520 retail registrations. The Small Car segment decreased by 2.33%. And the Mid Size Car segment increased 2.05%
Terry Hall wrote on July 21, 2014 - 7:48pm Permalink
Interesting stories on Honda Civic sales in the USA. In Australia where I live we get the sedan which is imported from Thailand and the hatchback which comes from the U.K. However neither of them sell very well in Australia or get good right ups.The latest Fit (We call it Jazz) has just been released here but we do not get the choice of the GDI engine and still get drum brakes on the rear. I would have to say that Honda Australia must think that we will take whatever they want to give us. I currently have a 2007 Jazz with CVT (Have been very happy with it) but am looking to update, but as we only get old style engineering I doubt if I will purchase the new model.
danwat1234 wrote on August 4, 2014 - 10:11pm Permalink
For 2015 I guess the Civic will finally get a new engine, an upgrade from the R18A1 engine, which is the same engine used all the way back to 2006! So direct injected engines for both the Fit and Civic, and hopefully the Civic hybrid and CRZ as well. With the MPG being close, I'd guess a Fit would sell more if more people didn't buy because of styling but because of practicality, versatility. Though the Fit has a torsion beam rear suspension instead of McPherson..