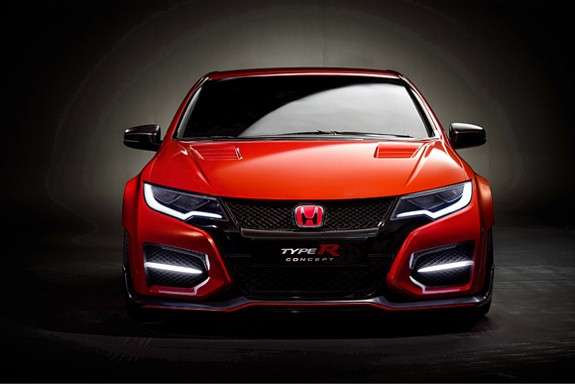 Honda design, labels the Civic Type R a “race car for the road.” Being old-school gear-heads we hold these truths to be self evident. None the less, Civic based race fans and Tuners wait for the Geneva unveiling of the 2015 Civic Type R Concept. Here’s why.
Advertisement

Honda Motors is very good at producing pent up anticipation in its fan base by leaking pre-show press releases and photo snippets. The Civic Type R is not the exception. We’ve been looking at spy photos and speculative articles for months culminating with the February release of an artist rendering of the tail -light integrated downdraft wing. While the wing may be a bit of a design stretch, much of the car’s rendering hints at viability as to near-future production application.

The drawings express extreme speed and handling punctuated by fat fender wells and vents; massive 18” rotors and Brembo brakes. Topping off the drool fest is the implication of a “Europe only” T.C. Si motor pushing the limits of torque and horsepower ratings packaged in a less than 2.0 liter 4 cylinder motor. Honda tells North America that they can’t have the Civic Type R. Why? they don’t say.

While Honda’s L.A. Auto Show FCEV car will not be hitting the streets any time soon, we believe that with enough interest expressed by the North American Honda fan base, the mother company may be convinced to introduce, with the help of HPD, a comparably equipped Civic Si based platform.

Looking to HPD’s WTCC Civic SCCA class racer we don’t believe that the Geneva concept design will be that far off of a near future production model.

Neither do die-hard Honda fans. Missing the days of 130+ mph( out of the box) 2400 lb small body Civic Si sedans and coupes, Honda street and race enthusiasts thirst for an obtainable, relatively affordable and competitive street racer.. Something to compete with pumped up XRs and BMW M3s.

Our readers believe that It shouldn’t be that tough for a manufacturer that dominates WTCC, SCCA club racing and is hell bent on breaking the Nurburgring lap record, to produce a compliant North American Civic Type R.

While the available Civic Si is a sweet distraction from the mundane routine of one’s daily commute, the weekend racing crowd is looking for a bit more from the company that developed the Acura NSX and the metric tuner dominating Honda Civic Si of the 1990s. More horsepower and torque; more handling and control.

Last week,while touring the streets of Eugene, Or., we came across a young tuner and his 1995 Civic Si Coupe. While the pride of ownership was very evident in the displayed fit and finish of the car, the point of impact was punctuated by the careful lifting of the Si’s hood.

19 year old Billy Griffith of Eugene, with the help of his father and a turbocharger, had pushed the 2.0 Liter K20 Z3 i-VTEC 4 cylinder Si over the 300 hp mark. And, the car was holding together.
Pretty impressive. We’ll feature this car in our “Reader’s Ride” segment in the weeks to come. He built the car for under $15,000.

Dad’s taking the Si away from junior; too many speeding tickets. Weighing in at a little less than 2400 lbs, Billy’s Si is capable of top speeds approaching 140 mph, with ¼ mile turns in the low 11’s.

The Civic is quickly becoming the hot-rod car of choice in North America.

While Billy doesn’t dream of driving a highly refined race-ready 2015 Civic Type R, we do.

We believe that if Honda would produce and market a North American street legal Type R club racer for under $50,000, the demand would be so high that they couldn't build enough of them. looking to the concept drawing of the Type-R, the massive Brembos, brake cooling vents, induction intakes and massive hatch integrated downdraft wing speaks volumes as to the cars potential.

We reviewed the HPD WTCC Civic back in December. We believe that the Type R will share similar racebred attributes. Turbocharged Honda technology producing greater than 300 hp and 245 lbs torque could push the car into German and domestic supercar territory.

Perhaps we’re off base here. What do you think? Your thought proving comment is always welcome at Torque News.