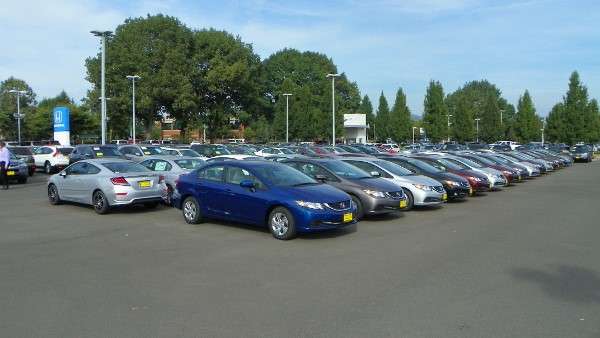 With Honda’s announcement of the pending 2015 Civic delivery, we thought we’d drop in on our local Honda dealership and snoop around a bit.
Advertisement

The short story: Driving onto Kendall Honda’s Eugene, Oregon new car lot, it soon became evident that there was no shortage of 2014 Honda Civic in stock. Despite a good August “Summer Sales Event” month, June and July were slower than usual, and Kendell’s inventory reflects it. "It’s not that customers aren't buying Honda’s” says Roger. “We have a bit more competition than we did in the day when the brand name Honda was a synonym for quality." "Today all cars are built pretty well.” Looking to the numbers despite a couple of specific model bright spots, Honda car sales are off a smidge
.
In Kendall’s case, the competition is Toyota and Subaru, the dealership group sells both.
According to our in-house source, CR-V is the number one selling Honda in Oregon's’ second largest city. That’s probably true for the entire Pacific Northwest. While Accord and Civic remain # 1 & 2 in sales for American Honda Motors, many residents of the often rainy Pacific Northwest look to CR-V for the added security of "Real Time All-Wheel Drive."

We’ll report on the mid-cycle refresh of CR-V the end of this month, but according to Randy and others long in the Honda sales game, what consumers would like to see in a new and improved CR-V is select "four wheel drive" when needed; Can’t please everybody.
Back to the 2014 Honda Civic purchase opportunity

As announced by Torque News and American Honda Motors: There will be no major,or minor changes made to the 2015 Honda Civic. Although located somewhere between the Civic LX and the EX we do find a pending SE(special edition) trim upgrade.

According to Honda News, $700 will buy you $1000 in electronic and cosmetic upgrades. We don't anticipate this offering to be a big sales enticement. However, we do anticipate Honda forging ahead with upgrading and eliminating personal connectivity issues and implementing specific accident avoidance systems throughout the line.

We know that Honda did perform a major cosmetic and electronic makeover for the Civic in model year 2014, 2 short years after the ill accepted 2012 introduction. Don’t cry for Honda, Civic remains one of the bestselling offerings in the sub-compact segment. A well-equipped 2014 Honda Civic LX 4 door with manual transmission sports an MSRP of $18390 plus applicable delivery, taxes and registration fees. Granted, that’s the base model Civic. With 2015 inventory being shipped very soon, you may expect to save 10 to 15% off of MSRP. Many Honda dealers are offering 2014 models at or below dealer invoice.

Remember, regional pricing will very as will available dealership inventory. Looking around, we find a surplus of Civiv EX, that’s where you’re going to find your best deal.
Good shopping!