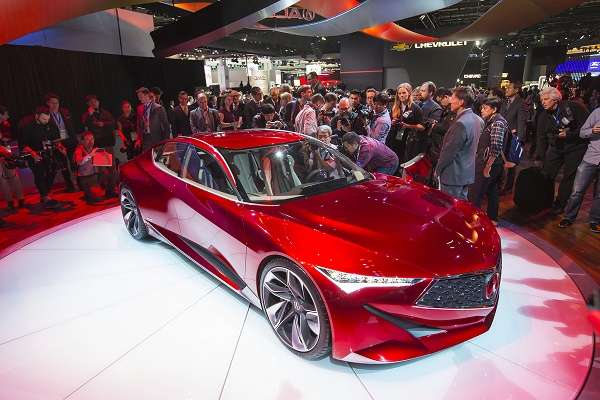 First impressions often capture our interest in a specific car, in this case Acura has our attention.
Advertisement

Yes,we know, the grill design should be the last consideration in the overall picture that is this precision inspired concept coupe, Acura’s much maligned “beak” may be on its way out.

Looking to Acura’s 2016 Detroit Show Precision Concept, this near future performance coupe-like design(actually a 4-door) takes 2017 NSX inspired body line and propulsion technology to the next level, albeit without the controversial “beak”

And that’s a good thing for Acura watchers who have questioned for years the maker’s marketing wisdom in the insistent inclusion of a design aspect panned by fans and critics alike. The grill design was the # 1 detractor frtom the 2016 TLX in speaking with our readers.The new Diamond Pentagon grilled concept car visually kills it!

Michelle Christensen designed concept drives miles ahead of the competition

I had the pleasure of speaking with Ms. Christensen in Los Angeles. Michelle is approachable, intellectual, exuberant, a master of her craft and exceedingly easy to look at. What impressed me the most about this extraordinary young designer was her grasp of the form and function of the automobile.

In short, how the mechanical, electronic and cooling requirements of a specific propulsion unit and drive train interacts and inevitably impacts the production design of the finalized personal conveyance, it’s a very tough balancing act.

It’s the art of the form that must bend for the mechanical, functionality side of the project, Michelle and her team are masters at compromise of initial design without losing the essence of that design, as demonstrated through the production 2017 NSX, the foundation for the visual that is the Acura Precision Concept. Acura will continue its endless pursuit of manufactured perfection, based on a solid foundation of precision-mandated-reliability and superior functionality. Acura calls it “Precision Crafted Performance.” In the words of Mr. John Ikeda: "There is no more clear promise for the Acura brand than Precision Crafted Performance," said Jon Ikeda, vice president and general manager of Acura. "We're committed to infusing this core Acura promise into every facet of our products and every aspect of our relationship with the customer." On first view, not only is the 2017 Acura NSX inspired Precision Concept visually stunning, its body design works as to proportional balance, exudes confidence, and looks fast at rest, while enticing the onlooker to explore the future of Acura, something the maker requires in North America to grow sales on the momentum of a near record 2015. A tip of the hat to Acura global creative director Dave Marek, he puts it this way:"The Acura Precision Concept is more than simply a concept vehicle, it is a design study model that literally will shape the direction of all future Acura products around our Precision Crafted Performance DNA," said Dave Marek, Acura global creative director. "The Acura Precision Concept is the leading edge of a renewed commitment to delivering Precision Crafted Performance in every facet of the product experience and creating a powerful and very exciting direction for the next generation of Acura models."

On the interior we find a future-forward design of unparalleled driver-to-car connectivity and near intuitive synchronicity. Thanks to interior design lead John Norman, the Precision Concept knocks on the door of future automotive design while preserving titillating cutting edge interior design aspects without sacrificing creature comforts. If in practice what Acura fans view Tuesday in Detroit is a viable preview of Acura’s design directive as indicated by the company’s mission statement, Buick, Cadillac, Lexus and Mercedes Benz, among other manufacturer’s competing for a slice of the pie that is the midsize premium performance segment in North America may wish to take notice. Acura’s on a roll, and the Precision Concept is just the beginning of the rebirth of a legend.