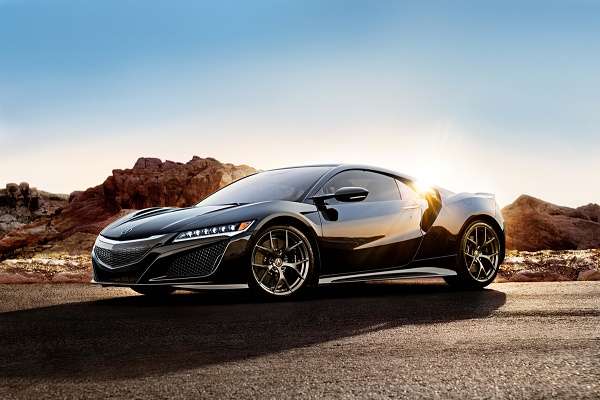 As to be expected, the most advanced vehicle in Acura history comes with a premium price tag.
Advertisement

O.K., from day one Acura has been rather transparent as to estimating the msrp of what is arguably the most advanced and driver intuitive sports car in the auto industry today.

Rather you agree with Acura’s approach to gaining measurable horsepower and torque, while reducing exhaust emissions and preserving segment topping fuel economy through gasoline - electric hybrid technology, or not, 2017 NSX is impressive! Few will argue that point.

But, as promised by Acura Division the next generation NSX Hybrid Supercar will be of limited production and pricey!

Friday, Acura took the first step to marketing the all new super handling all-wheel-drive bi-spoked turbocharged, 2-place, by publishing the estimated MSRP ($156,000 to $205,700) some heady numbers for 2017 NSX, yet not surprising to those in the know.

According to Acura: Acura today announced additional launch details for the next-generation 2017 Acura NSX supercar coming to market next spring, including pricing and the order taking process. Acura also revealed plans to auction off the very first serial production NSX, VIN 001, at the Barrett-Jackson collector car auction in Scottsdale, Ariz. the last week of January 2016.

All proceeds from the auction sale will go to a pair of children's charities: the Pediatric Brain Tumor Foundation and Camp Southern Ground, the passion project of Grammy Award-winning artist Zac Brown.

After all, we’re talking of a super-low production, mostly hand-built one of a kind. When 2017 Acura NSX hits the skids mid 2016, there will be nothing else like it on the road.

Initially panned hard by the critics

Acura Public Relations and marketing takes a very cautionary approach to introducing this long in coming rebirth of the iconic NSX to the buying public.

Initially, just a handful of automotive journalist have driven 2017 NSX, it’s not a love fest. But as stated from day one by Acura, the NSX, a car greater than the sum of its parts, “is not for everyone.” And, I believe that the MSRP will not only influence sales, but make 2017 NSX an instant classic on its initial release. You may read my first 2017 Acura NSX impressions here.

According to Acura, the company will begin taking orders for 2017 NSX in February 2016. Acura’s Jon Ikeda tells us: "The NSX is the pinnacle expression of Acura precision crafted performance and we're thrilled to take the next step toward bringing it to market," said Jon Ikeda, vice president and general manager of the Acura Division. "We're creating new space within the supercar realm, pushing the envelope beyond the conventional thinking about supercars – just like the original NSX." Thank you Mr.Ikeda.

Will BMW 8 Series or the soon to arrive Ford G.T. kill NSX sales as predicted by Acura haters? No! I’ll leave it at that for now. What else is Acura up to?