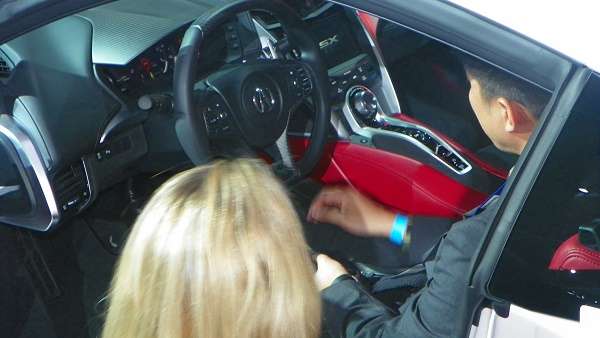 Torque News gets up close and personal with 2017 Acura NSX

Finally, taking a driver’s seat position in Acura’s next generation supercar was both exhilarating and just a bit disappointing.
Advertisement

Seeing 2017 Acura NSX Hybrid Supercar in person at the 2015 Los Angeles Auto Show was an emotion-charged experience for me. I’ve covered the reinvention of NSX for several years, viewed a handful of concept cars, and was hopeful as to its interior volume, prior to actually sitting in the driver’s seat. NSX is shorter than 2016 Civic or the current Acura ILX, but then it is a 2 place car.

Not built for driver’s of exceptional height or girth

Getting down to the nuts and bolts of 2017 Acura NSX: If your long torsoed, taller than 6'2.” or weigh over 200 lbs, you may find the Acura NSX driver-environment to be just a scosh on the tight side. I’ll leave it at that.

Yes, At 6’5” tall I did “shoehorn” my way into the very snug, high bolstered, infinitely adjustable driver’s seat, but would I go the distance in NSX? Unfortunately for me, and the other 'want-to-be' NSX owners landing on the high end of the human growth chart, the mid engine gasoline/electric hybrid may not be a suitable fit for a long term ownership commitment.

Sure, I can squeeze myself into 2017 NSX, it’s that long distance ride with knees on the dashboard that concerns me just a bit. Strangely, looking to the cab dimensions of the 2016 Honda Civic Sedan, NSX claims greater leg and hip room than Civic, with 1 inch less headroom. Perhaps my seat was not adjusted all the way back.

Note: I found head clearance and shoulder width to be more than adequate. It was the midship engine firewall that restricted the ‘moving back’ of the driver’s seat, hence the knees darn close to the dashboard.

None the less, with the seat tilted back a bit, I did reach a compromise with NSX

The 2017 NSX interior exudes the fit and finish quality of a finely crafted leather Italian loafer. In our case, the white metallic body paint on red leather, charcoal gray, and burnished aluminum interior stirred the memory of earlier sportscar encounters. That new car smell, mixed with the scent of hand crafted leather seating, sets the stage for human-car connectivity, proprietary to the Acura brand. Having experienced RDX, TLX, and MDX, the console and center stack of NSX held a familiarity, as did the NSX gauge cluster, I-MID and smartwheel. Although NSX is intimate in dimension, visibility out the windshield and side windows is exceptional.

Acura’s done a very commendable job of centering the driver within the NSX cockpit. All driver visual monitoring and manual control-connectivity is in its proper place.

While visibility to the rear of NSX is impaired by its mid engine design, ample side mirrors, rear view mirror and backup camera with LaneWatch ™ capability, more than compensates for the blind spots.

We were assured by Acura engineering that directed airflow keeps the cabin climate comfortable, with engine and mechanical systems generated heat effectively isolated from the cabin. With a twin turbocharged 3.5 Liter injected V6 and dual clutch 9 speed transmission sitting behind your head, that’s a good thing! The removal of heat from the engine compartment and 3 electric motors,(573 combined horsepower, 400 + ft-lb torque) dictates much of what is NSX body design. When you look to NSX, you’re looking at the future in high-performance hybrid automotive architecture.

2017 NSX is dimensionally small in stature, as it should be. Reality check: NSX is a street legal track car with touring capability. You can place a driver, passenger and a small bag in it, that’s it! Burt then again, isn’t that what you do with your last generation NSX?

Frankly, there are many fine performance cars available in the under $200,000 exotic sports car segment. And yes, I do fit comfortably in the Porsche 911 Targa featured at the 2015 Los Angeles Auto Show. The hook for me as to 2017 NSX is the super handling all wheel drive, electric-only drive mode, and the electric motor torque boost propelling NSX into supercar territory.

looking to the handling and performance implications inherent to a well balanced mid engine performance car, NSX will be an exceptional road handler, with unrivaled intuitive-like car to driver command connectivity.

While not the highest horsepower and torque rated 2-place in the segment, 2016 NSX when released to market in the spring of 2016, will have one of the higher power to weight ratios in the segment, along with an unrivaled list of Acura technology, including many semi-Autonomous driving features.

Acura marches to its own drummer While attending the L.A.A.S.,Torque News also had the honor of interviewing NSX designer Michelle Christensen. Michelle embodies the young-progressive future-forward side of the ongoing reinvention of automotive designed and manufactured in the North America Acura lineup. Our interview with Michelle was near life changing, and will be shared in an article before the end of November.

The dance that is body design meets mechanical, safety and technical requirements

I couldn't tell you what dictates the final production cabin volume of 2017 NSX, that’s an inside quantifier, and Acura isn’t going to share it with us. However, looking to the car that Road & Track and others have panned as being(perhaps) a bit too technically complicated, I point to the science side of NSX, as well as the well sculpted body line, that in my most humble opinion is like no other presented in the automotive industry today.

The lowest production car in Honda history will go to a select few in North America.
Slated for worldwide distribution, the built in Ohio NSX will come as close to a hand built ‘one-off’ as any car in Honda, Acura history.

Although the initial NSX production numbers have not been disclosed by the powers to be, manufacturing will be facilitated in a performance center with little more than 100 employees covering world-wide distribution.

With an estimated beginning MSRP of $170,000, the NSX that I sat in will sell as quickly as the Ohio Performance Manufacturing Center can build it. I look forward to viewing the facility in person the winter of 2015. Hopefully I’ll gain track seat time behind the wheel of 2017 NSX. I’ll lose 20 pounds if need be.