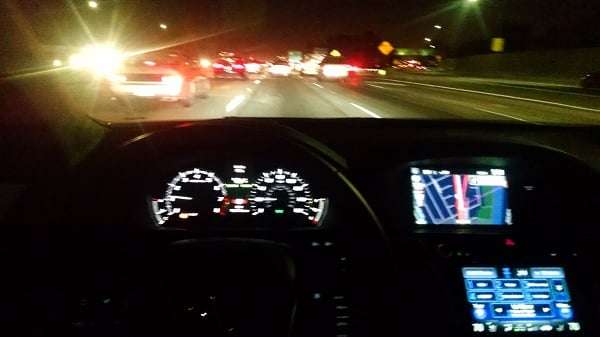 Warning: Do not attempt this experiment on roads at home, without first consulting you cars owner's manual.
Advertisement

Attending the 2015 Los Angeles Connectivity Conference prior to walking the mind boggling expanse of the Los Angeles Auto Show would make for an exceptional auto-experience for any gear-head.

With automotive industry experts and journalist from around the world reporting on exciting advancements in human and automotive connectivity, the 3 day experience proved to be a game changer for this reporter.

Bottom line: The age of the Autonomous car is upon us. With fewer than 4 years remaining in several manufacture's plan to release self-driving cars to the public, would it be possible to drive across Los Angels, hands and brake free, under the exceptional automated control of 2016 Acura TLX with Advance Package? Acura was kind enough to facilitate our request for the key fob to a near zero miles 2016 Acura TLX. One of if not the most technically advanced midsize sedans on the road today. We contemplated critiquing Acura's near Autonomous features as we departed the Park One Spot at L.A.X..

This year, Torque News pushed the 2015 Los Angeles Auto Show experience to a higher level by conducting a 3 day test drive experiment of sorts, on the busiest city streets, highways and freeways in the United States. We would take on L.A.’s “big-tangle,” with 2016 TLX, and come out the other side relatively unscathed.

For me, the week of the Los Angeles Auto Show marks a time of letting go of all ‘old-school’ presuppositions of possible technical malfunction, as to Acura’s active safety suite. And then allowing 2016 TLX with Advance to drive us through the work day rush hour traffic of L.A.’s nightmarish freeway fiasco.

2016 Acura TLX with Advance, a bit of history

Torque News covered the introduction of Acura’s midsize premium sedan at length in 2014. What would soon became a top seller for Honda’s precision car lineup captured our attention at its introduction in Virginia.

A few weeks later on the wet roads of Eugene, Oregon we would conduct an extensive drive reviews of Acura’s top of the lineup TLX SH-AWD. Featuring Acura’s 3.5 Liter fuel injected V6 gasoline engine,(290 horsepower,267 lb-ft torque) and 9-Speed automatic transmission, TLX answers the push of the Drive By Wire ™ gas pedal with copious amounts of usable torque and quick off the line horsepower.

Designed to deliver a refined, comfortable drive and ride experience, while opting the driver the opportunity of measurable sport-sedan performance, TLX delivers a split drive personality inherent to the Acura mark. Most drivers love the 9 speed transmission, some don’t

A push button DMS, (drive-mode-selection) electronic parking brake set and release, push button transmission setting(P,D,R,) and SH-AWD with Advance Package, round out the TLX experience to be unique within the midsize premium sport sedan segment.

It took but minutes behind the wheel to come to the realization that TLX brought to the premium midsize car entry portal a combination of standard and optional features, previously unseen in the under $50,000 segment, with several features proprietary to Acura. Did we discover a mechanical, techno “quirk” or two behind the wheel of TLX? Sure, keep reading. As to active safety features, yes, that is there too. Acura Engineering waxed poetically with great pride about it in Virginia, but we were here to drive, and readily disabled all or most of these features with the push of a button.

2016 Acura TLX V6 is a torque-monster when called on

Although not the quickest midsize sport-performance car in the premium segment, looking to the total package that is 2016 TLX, one would be hard pressed to find a greater combination of standard features, exceptional optional features and SH-AWD (Super Handling All Wheel Drive ™ ) in a comparably priced car. *Priced from MSRP $31,695 to $44,800 plus all applicable delivery charges, dealer preparation, fees and sales tax.

“Let go and let God,” or in this case trust Acura engineering It takes a bit more than a dash of courage and deprogramming of decades-long drive training, and subsequent habit, to NOT apply the brake peddle when coming up on a slowing car in stop and go traffic.

The sensation of Autonomous driving is a bit unnerving at first, giving way to a sigh of relief, and then -- curiosity as to the working of Acura’s Adaptive Cruise Control ™ and Lane Keep Assist ™ technology. It’s a bit of a mind blower!

With one finger on the wheel, (TLX will sense you're not steering) and no foot on the brake pedal, I drove from Seal Beach in Orange County, California to downtown L.A.’s Koreatown; in quite possibly the worst stop and go freeway traffic I’d experienced in well over a decade. We’re talking about 45 miles or so at speeds from zero to 60 m.p.h..

With navigation set for my hotel destination in Koreatown, 3.5 miles from the Los Angeles Convention Center, I turned on to the 605 Freeway North, transitioning to the 105 East and the 110 (I think) to downtown Los Angeles.

Although it was 8:30 pm on a Tuesday evening, the workday traffic remained a transitional slug fest. For those that commute in Los Angeles on a daily basis, you have my deepest heartfelt sympathy, there appears to be no lag-time in L.A. traffic.

The red flash of the taillight pains the eye as traffic comes to a sporadic, near instantaneous stop. Mental clarity of intent as to the next crucial exit, convoluted by the perplexing white and blue light glare of the far right lane of oncoming traffic, dins the senses.

That all too familiar electro-woman’s voice comes to life, blasting direction commands. ‘Why is she yelling at me, had we dated in a past life?’

This is the mental static that races through this driver’s cranium while attempting to “let go” and let Acura TLX take over the arduous task of mitigating heavy stop and go commuter traffic.

Throw in a handful of between the lane, high speed, crazier than bat sh.., motorcycle commandos, add a fender bender or two, a semi truck and trailer in the wrong lane, and a young “Tuner” seemingly driving in his or her’s own reality, you get, this is Los Angeles freeway travel, not for the faint of heart!

Here’s the short story: The day of the Autonomous driving car is most likely closer than you think. And frankly, many of the systems required for Autonomous driving are currently featured in the 2016 Acura TLX with advance Package. The latest generation of Acura’s adaptive cruise control enables the driver to set and maintain a preferred speed and following distance, while driving in stop and go commuter traffic.

Adaptive Cruise Control: On more than one occasion, while traversing the stop and go freeway expanse of los Angeles, TLX, utilizing bumper sensors and a mirror mounted camera, gauged the speed of traffic flow, the driver’s lane center position, held the selected following distance, slowed to a near stop, then accelerate back to the pre-set cruising speed without so much as a hiccup. And did so in night driving conditions under varying, transitional lighting. Not knowing our return route to Koreatown, once Acura’s voice recognition accepted my personal tonality (this takes a few minutes) I voice-dictated(you do have a manual option for input) our return address into the Nav’s data bank, thus allowing Acura to verbally return me to downtown Los Angeles. Note: Congratulations Acura on debugging a rather problematic TLX navigation system.

Truth be told, as giddy as a cheerleader at her first N.F.L. football game, I threw caution to the wind, allowing Acura technology to not only guide us through the wilds of Los Angeles, but did so while steering with one finger on the weel and no foot on the brake. Check out the short video for a visual confirmation of Acura’s superior Adaptive Cruise Control, a not so small part of the Advance Package, available as an option throughout Acura’s lineup of premium sedans and SUVs.

Our special thanks to Acura Public Relation's Ms Jessica Fini and Ms Allie Colter for facilitating this exceptional freeway test drive. much appreciated..