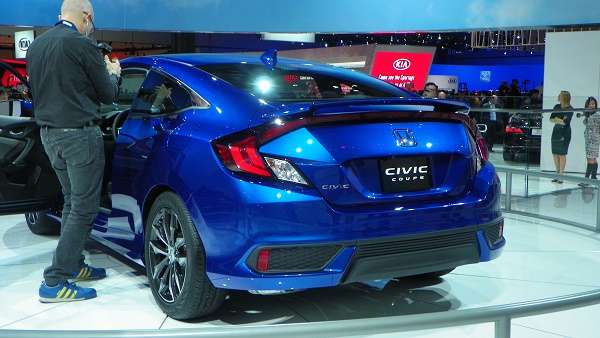 Cutting to the chase: The 10th generation Civic is the most dynamic, upscale body visual in the marks 42 year history. Long gone is the hard edged squared body line of the past, and mimi-esq round body 3 door Coupes of the 1980s and 90s. How does 2016 Civic Coupe look in person? That’s an assessment of personal opinion.

However, it was not unusual to overhear members of the automotive press attending the L.A. Auto Show, ask the question: “Is that a Civic?” It’s that different, it’s that cutting edge.

Yes, we like the subcompact Civic styles of yesterday too, but safety and consumer demand for space and utility has buried the 2,000 lb Civic slot car of yesterday. So, wipe those tears away lil’ Tuner, Civic’s pushing the compact classification size limitations, let’s move on.

In a world according to Honda:

Manufactured on a universal World-Compact-Platform, what we view before us on the Honda stage is a 10th generation Civic of unprecedented proportion. Longer, wider and a bit lower than the 2015 offering, Honda puts the added pan length (5 inches) in the back seat where your passenger needs it. Coupe -- yes it has a rear seat too, but it’s just a bit tougher to get in and out of than the epic Civic 4 door sedan. For those that require ease of rear seat access, check out our first drive impressions of 2016 Civic Sedan here.

Beaming with the pride of a newborn's father, Mr. Jeff Conrad peered up to the center stage platform and waxed poetically as to the design attributes of Honda’s latest Civic Coupe. Yes, Civic is visually captivating, but is the 2016 Concept inspired design balanced? The introduction of the Civic Coupe rounds out an unprecedented year for Honda Motors with what’s been rightly referred to as “2015 The Year of Honda.”

In the words of Jeff Conrad: “We continue on our epic 10th-generation Civic journey with the sportiest, most sophisticated and tech-savvy Civic Coupe yet,” said Jeff Conrad, senior vice president of American Honda Motor Co., Inc. and general manager of the Honda Division. “I think our customers are going to be utterly surprised by what this new Coupe delivers in terms of refinement, safety, efficiency and fun-to-drive performance.”

Looking to the Civic stage, Honda’s Executive Vice President Mr. John Mendel eloquently put it this way: “ When Honda builds a great car, it makes us all look like geniuses. True enough!

The evolving story that is 2016 Civic doesn’t stop here. Although a mere 10 to 15% of Civic buyers opt for the Civic Coupe, those folks will not find one at their local Honda Dealer until March 2016.

Civic Coupe marks the second entry in a 5 play series

Honda tells Torque news that within 18 months, a next generation Civic Hybrid, Civic 5 Door Hatchback and the much anticipated North American specification Type-R will be added to what they refer to as ‘the most dynamic lineup in Civic history.’ And of course, we look forward to driving the next generation turbocharged Civic Si. All-wheel-drive anyone?

Bonnevillesaltflats wrote on November 25, 2015 - 11:48am Permalink
"And of course, we look forward to driving the next generation turbocharged Civic Si. All-wheel-drive anyone?" What's this "we" business? Are you so sure there's going to be an SI? You mentioned that a lot of models that have been announced or promised by Honda already, but no mention of an SI from Honda, that I've seen. Seems to be wishful thinking, And 4-wheel drive? Surely that doesn't come on an SI from Honda, maybe on the RS.
Parks McCants wrote on November 27, 2015 - 9:12pm Permalink
Welcome cranky old Bonnevillesaltflats. Yes, Honda has promised an Si variant for 2016. It will be rolled out in the early spring following the coupe. O.K., the all-wheel-drive comment is pure speculation on my behalf. However, looking to historic Civic offerings, it would make sense to offer AWD to the market with the launch of the built in Surrey hatchback. "Stay tuned"as they say. It's all coming in good time.