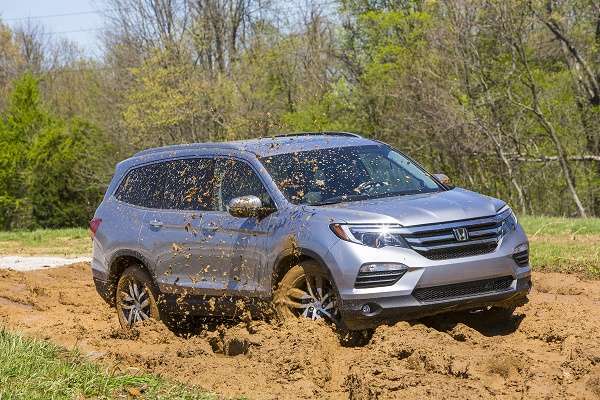 We look to 2016 Honda Pilot’s electronic actuated traction control system, and how it works.
Advertisement

With the push of a button, 2016 Honda Pilot owners, regardless of front or all-wheel drive trim variants, can increase road traction with the push of an I.T.M. (Intelligent Traction Management) toggle.

Torque News experienced this feature on the infield of a NASCAR race track in Tennessee. In our case, loose gravel and sandhill was the obstacle. No problem for Pilot Elite featuring a 280 horsepower i-vtec v6, 9-speed automatic transmission, all-wheel-drive, and Acura’s patented electronic actuated rear differential. It works! Check out my latest drive review of 2016 Honda Pilot here.

In a recent sit down with Honda Engineers, Torque News was educated as to the inner workings of what is arguably the most advanced,fuel-efficient and road sticky Pilot in Honda History.

In addition: "To further enhance all-weather performance, both the front-wheel-drive (FWD) and all-wheel drive (AWD) Pilot models include Intelligent Traction Management with push-button control to allow the driver to choose between Normal, Snow, Mud and Sand modes with AWD, and Normal and Snow with FWD for optimal performance and traction in varying road and surface conditions,” in a world according to Pilot.

Last winter Torque News reported on the exceptional icy road and snow traction exhibited by Honda Ridgeline Pickup. For 2015, with Ridgeline sitting on the sidelines for a model year, we now look to 2016 Pilot to take us through what is being predicted by NOAA as a strong El Nino year, with exceptionally heavy rain and snow predicted for most of the U.S. and Canada.

We haven't had 2016 Pilot in the snow as of this posting. So, we’ll let Honda tell the story in a short video.

Tesla Contemplates A New Strategy for China Retail even As Sales Boom
Jay Leno on Elon Musk & EVs: “I Think He Should Get ... Credit"
END_OF_DOCUMENT_TOKEN_TO_BE_REPLACED