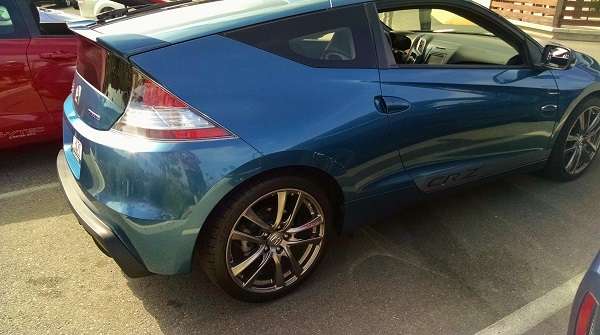 We bid a fond farewell to what is arguably American Honda’s least loved offering. looking to the sales numbers, what came off the assembly line in 2010 as the “Car of the Year’” in Japan, has never quite caught on in the U.S..What killed the CR-Z in North America, Honda's mostly forgotten hybrid performance coupe.
Advertisement

As with many car models heading to the halls of Honda history, 2015 CR-Z is arguably the best performing rendition of the critically panned Japanese build gasoline/electric hybrid sports-coupe built to date. While not offering a full compliment of active safety features; as experienced behind the wheel of this car, 2015 CR-Z presents a drive and ride experience like no other car offered in North America today.

looking to CR-Z specifications, what one reads on paper doesn't translate into the actual experience one encounters behind the wheel of Honda’s only pocket-roadster - like offering. As found in the 2015 Honda Accord hybrid, CR-Z is a blast to drive!

Note: After driving CR-Z on several occasions, carefully weighing the attributes of this well built mini-coupe against the competition, and Honda’s current lineup, I’ve opted to generously sprinkle the word “Sport” throughout my verbal and written description of what is unfortunately the last *iteration, (this word bugs me) of this exceptionally well engineered Japanese 2 seat hybrid roadster.

No, you won’t find 200+ horsepower under the hood of 2015 CR-Z. However, the CR-Z EX with Navigation,(6 speed manual transmission) as viewed in the attached video, does produce 140 + lb-ft torque from 1,000 to 2,000 rpm.(low to mid-range) And with 50% or more battery module charge remaining, a Sport + button produces a turbo-like launch; for those drivers wishing to stomp on it a bit!

To put the CR-Z hybrid torque band into perspective, a comparably equipped, non-hybrid Honda Civic (1.8 Liter i-VTEC 4 cylinder gasoline) CVT or manual transmission, produces 129 lb-ft torque at 4300 rpm. The CR-Z difference, for the sport-driver, is experienced in the off the light launch, short wheel base,(-10 shorter than Civic ) shorter body length,(17 inches shorter than Civic coupe) and lighter GVW.( - 147lb)

So in short, 2015 CR-Z presents a Japanese-built, electric assist gasoline hybrid, with mini-coupe-like handling, larger car drive and ride characteristics, and a stand-out body design unique unto itself. So, what killed CR-Z sales in North America?

2015 Honda CR-Z is a 2+2 configuration in all markets sans North America. In the U.S. it’s a dedicated 2 place, with ample rear deck storage, a great stash tray, quality interior fit, finish and a combined driving MPG of 37. The driving environment of CR-Z is comfortable and spacious, the ride, firm but not jarring; presenting ride stability and handling on par with many sports-cars on the market today.

Unfortunately, CR-Z has received a bum rap from the automotive press, sports an MSRP approaching that of Civic Si, and as stated earlier, seats two people. CR-Z is a niche vehicle. We drove it, we like it.

JeffS wrote on August 6, 2015 - 12:51pm Permalink
Hey there Parks. 1st thing that caught me is you fit in it, with seemingly room to spare. I think you pretty much nailed why it didn't do better. Just a bit too much a niche car. I think I mentioned that when I was shopping I looked for a supercharged HPD version to take out, which of course there was none on the lot to be found, so I ended up with the SI. Truth be told, probably happier for it. Off on a bit different direction, I keep having this reoccurring pipe dream that somewhere in the scheme of things over at Honda, a, "Toned down" version of the Acura NSX technology is in the works. There seems to be allot of secrecy regarding the "Type R" eventually slated for us here in the US. Just a pipe dream, but also just the type of thing Honda does when it decides to Rock the boat in the automotive world. Now wouldn't that be something, a NSX for the masses. Taking the CR-Z supercharged idea to the next level, more hardcore, more performance, in a bit more practical package, using technology they have gleaned from the NSX, which would also help to offset the huge developmental costs. It's bound to trickle down sooner or later. I just can't help but feel that Honda has a few more surprises up their sleeve. Speaking of the NSX, any idea of when Acura is gonna turn over the keys to you for a test drive? Have a good day there Mr. Parks.
Parks McCants wrote on August 12, 2015 - 11:18pm Permalink
Yes, there is a new 2 place in the works at Honda. And, it's safe to assume that it will be turbocharged, double clutched, and damn smart as to handling, technology and fuel economy. Take care..