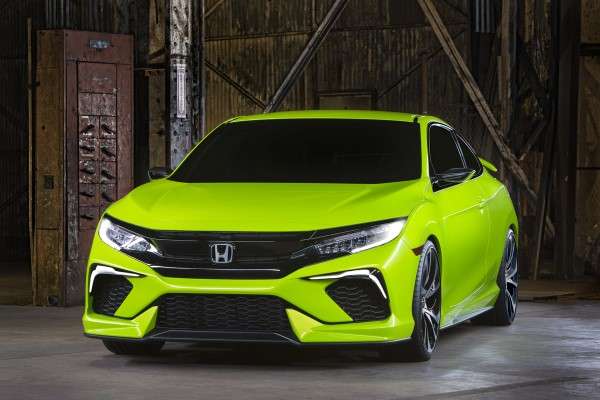 Noting an unprecedented positive response from the automotive press and Honda fans alike, it looks like the unexpected introduction of the 10th Generation 2016 Civic Concept World-Car has rocked the "C" sports segment..
Advertisement

The New York International Auto Show revealed a surprise or two coming to North American drivers in 2016. At the top of our list sits the visually stunning 2016 Honda Civic World-Car Concept. Will it be turbocharged?

That’s the number one question Torque News-Honda readers ask when they comment on Honda’s 2016 Civic Concept. Will it be turbo-powered, what will it cost and when can I buy one?

The 10th generation Honda Civic Concept is visually stunning. That’s a personal assessment that’s tough to argue with. A mold-busting design that holds up well when looking to the not too shabby, exiting 9th generation 2015 Honda Civic Sedan, Coupe and performance Si variants; with formidable competition coming from Europe, Japan and U.S. manufacturers.

Civic remains the #1 selling non-fleet-sale compact sedan in North America. None the less, Honda says it’s time to kick it up a notch, Si fans agree.

The biggest news coming Honda’s John Mendel was a bit more than a hint, yet less than a commitment as to the import of a U.K. manufactured Civic Type-R 5 door performance hatchback. In speaking with Honda, Torque News confirms that the U.S. bound Civic Type-R will not share platforms with the current built in the U.K. offering.

As Civic Type-R fans dispute the nuances of Mendel’s announcements, we do know that production of the EarthDreams ™ turbocharged 4 cylinder i-VTEC gasoline engine is on line for the Anna, Ohio engine plant, Honda’s largest.

With the officially announced $340 million dollar expansion will come a line of fuel efficient “Green,” low emissions, high torque direct fuel injected gasoline engines; bringing with them a fresh injection of sport-like performance characteristics; 2016 Civic may be optioned with one.

For those that don’t want a hatchback…

Honda fans anticipate the introduction of the long-awaited turbocharged Honda Civic Si sedan and coupe some time in 2016. Looking to Europe and Japan, a turbocharged variant will flatten out the torque curve a bit, by producing greater, usable torque at a lower rpm. 2016 Civic Si should be Honda’s logical answer to the auto industries growing use of Eco-efficient turbocharged engines built by Ford, Hyundai, Scion and other manufactures in a bid for dominance in the compact performance class.

Looking to the evolution of Civic Si

What will it take to push Si to the next level in performance and market appeal? Reality check: Honda Civic Si is and always will be a niche segment vehicle. Harsh of ride, stiff of seat and long-legged as to engine rev-limits, Civic Si while fun to look at is not for everyone. On viewing the 2016 Honda Civic Concept, we discover a bit larger and (possibly) more refined world-car platform of broad implications. Note: Honda has not revealed an interior or specification to the press. Simply put; They don’t exist as of this posting.

However, looking to the current evolution of the Honda lineup, the advancement of Honda EarthDreams ™ turbocharged technology in Europe and Japan, and Honda’s advancement in chassis, ride and transmission technologies, we anticipate 2016 Civic to be a segment benchmark setting sports compact of affordable performance and engineered bullet proof excellence.

JeffS wrote on April 15, 2015 - 7:23am Permalink
Looks like Honda is upping the ante for sMiles/p/g. I've seen speculation that the 1.5 Turbo will have about the same output as the current 2.4 with better sMilage projected. My guess is that Honda will massage this engine to bump up the HP/torque in the SI, or possible use a detuned version of the Type R motivator. Honda needs about 230-250 HP in the Gen 10 SI to compliment it's new Rice Rocket for the masses. That would put it somewhere in between the, "Pedestrian" Civic and the Flat out Type R. Honda probably has a few more, "surprises" coming regarding the nxt. Civic and the way its looking, it's gonna be good ones. Nothing like a little competition to improve the breed and it appears that Honda is on its way to a knock out.
Parks McCants wrote on April 15, 2015 - 11:45am Permalink
Good morning JeffS. Well stated!
JeffS wrote on April 15, 2015 - 1:49pm Permalink
Hey there Parks, DAMN the design guys for the exterior penned a beaut. I like the lines of the Gen 9. The front end is OK, but to my eye a bit out of place with the rest of the car, (nit picky stuff). This Gen. 10 looks less, "Boy racer", (I like a Boy racer look, as long as there is a little something to back it up), but this new one is mature wicked from every angle. Like everyone else I suspect the, "concept" will be toned down for production, (listening to Mendel's presentation, one wouldn't expect by much) and maybe that's one of the, "surprises" we're in for, that being, the production model being virtually the same as the concept presented. The 20 inch wheels will go, but that's OK, the 18's on the Gen 9 are just about right in size, maybe a little bit bigger profile on the nxt. SI, 235's on 18" rims? The rest, like the LED lighting and overall lines look doable from a production point of view , while still offering typical Honda value. Owning a Honda, I get the various e-mails from them. They recently sent one that touts the new Civic. There are several pictures in the slide show included, which highlight things like the LED's and Front and Rear end. I find it hard to believe, Honda doing so, many significant changes will take place. If they stay true to the concept, if they, "Bargain" price it, as they have pretty much always done, if they offer all the flavors of the Civic they are alluding to, (from econo to Hyper Sports car and in between), and if they do not make it too difficult to obtain, (I'll still don't quite get why it's so hard to find an SI on the lot, sometimes near impossible if one has his/her mind made up on a specific model, color and such, I just plain lucked out with mine and got just what I was looking for), they are probably going to sell them as fast as they can get the line moving. With all that's going on at Honda/Acura, (it's about time, they were definitely on some kind of hiatus for a while there), it's a good time for all of us, who are fonda Honda. (Looks like you'll have plenty of stuff to report on, not going to run out of new material any time soon, I'm sure that makes you, "Happy".)
Parks McCants wrote on May 11, 2015 - 7:26pm Permalink
The 10th Gen Honda Civic will be yet another best seller for AHM. Reader response is huge, as is the anticipated excitement as to driving the next generation Si, and the near future imported built in Sterling 5 door performance hatchback. As you say Jeff, very exciting times for Honda and Honda fans. Stay tuned; this summer is going to be an epic one!