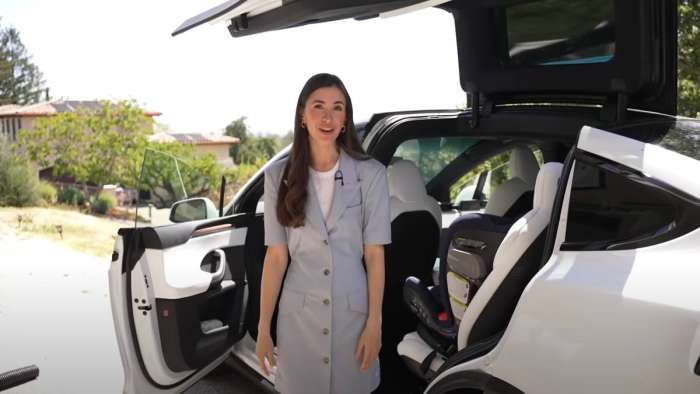 The Truth About the Tesla Model X From an Actual Owner Is...

We have a detailed review of the new Tesla Model X from an owner who has spent some time with her car. She shares everything about service appointments to challenges she's had and all the things she loves about the car.
Advertisement

The Truth About the Tesla Model X From an Actual Owner Is...

After a year of waiting for her Tesla Model X, Silicon Valley Girl was excited. All her friends told her she would love her Tesla and stick with it. Let's see if she was happy with her purchase, the good and the bad.

Firstly, she tried auto steering and let the Tesla drive itself. Auto steer is Tesla's FSD software that drives on side and city roads. It's not perfect and the driver must be ready to intervene at any time. She talked about sudden braking and how that was a problem and that she was becoming lazy using the FSD software. She's decided to stick to auto pilot, which is what Tesla uses for highway driving.

The Model X has a yoke steering wheel. Her husband is a race car driver and he is already used to the yoke steering wheel, however, she had to get used to it. When she was learning how to drive the Tesla, she was told never to cross her hands while turning. She says that is difficult to do. She had a few times at first where she tried to put her hands on top of where the steering wheel would be. The yoke is relaxing to put your hands on while on auto pilot.

How much can you fit into the Model X? Their car is a six seater and there is a need for car seats. The trunk is small with the six seater car, but there is some room. There is front trunk, called the frunk, that is also able to fit things too. When she shut the frunk, she didn't close it all the way and had to press down harder.

Charging the Model X - she was gifted a charger to charge her car. If you charge in the evening or night, it's $3 per hour. During the day, it's about $4 per hour. It takes 6 to 7 hours to charge the car. She charges at around 100 miles which is needed for a common road trip of hers to San Francisco. Her charge at home costs $20 to $25 per cycle. Gas cost $110 to $120 per cycle. She sees the Tesla as being 3x less expensive and you don't have to change oil and do a lot of other maintenance. The car is like a giant phone you charge.

Other Things About the Tesla Model X

She was thinking about getting a Tesla for a while and waiting a few months. They saw a Tesla boutique and put $100 for a Tesla and went through the process of buying the Tesla - which was largely waiting for the year to receive their car. A benefit of having the Tesla Model X is closing all the doors just by pushing a button on the screen.

She took a loan to buy the Tesla and is making payments over time. Eventually, she will own the car. All of this was done online using Tesla's website. You specify a down payment, have an interest rate on your loan, and go into the Tesla service center to pick up the car when it is ready for delivery.

To change gears in a Tesla is pretty simple - just swipe up and down on the left side of the center console. She took her car through a car wash and was asked to put her car in neutral. It took her a moment to realize she'd never used neutral before. There is a small button on the bottom left to put the car in neutral.

The Model X has falcon doors. The doors don't always open fully sometimes and she has to close the door and open it again. When she opened it the second time, it worked and opened all the way. It is very convenient to get in the car when the doors open up all the way.

What are some things she doesn't like? Sometimes the air conditioning system stops working and only puts out hot air. She's hoping Tesla service can fix it fast. She's had two service appointments for recalls. One issue was fixed with an over the air update. The other was problems with the air bags. It was ok to drive the car, but they are in line for an air bag fix.

If your Tesla car breaks in any way - you can create a service appointment using your Tesla app. Her appointment was in 18 days and she'll have to operate her car without air conditioning. She should not have to pay for this.

She recommends carrying your car key with you at all times in case there is an outage in the vehicle or your phone. You can swipe your car. You can also give your car to anyone for a valet or car wash if needed.

Her car's turning signals stopped working and she was loaned a Model S while Tesla fixed her car. She is one of the unfortunate customers who has had several issues with her new car. I think this isn't a common experience.

Her final thoughts about Tesla are that the cars are great, but that the quality of their Model X upon delivery was not quite what it should be. It is challenging to build cars in volume production and never have issues with the vehicles. Tesla does everything in-house.

Her final thoughts about the Tesla are that she would still get a Tesla Model X, but she would buy an older Model X that is used and proven to have no issues already. Her loaner Model S looked older and it was a 2017 Model S with 50,000 miles.

What do you think about her experience with the Model X - was this a typical experience? Would you get a Tesla Model X?

For more, see this video below, from Silicon Valley Girl:

Scott wrote on June 7, 2022 - 6:36pm Permalink
Let’s see… MSRP: From $114,990. I assume that when she sees this as “…being 3x less expensive…”, that means operating cost. Even then, the economics don’t work out to justify based on operating cost savings vs. a $40,000 vehicle (3x less price which still buys a pretty nice vehicle in my book). So, even if I could afford (minimum) $114,990 (I can’t in this lifetime), it is silly to try to rationalize based on operating cost savings. But, I guess if you are wealthy enough, you can pat yourself on the back and smugly feel good about being so frugal.
Ron wrote on June 7, 2022 - 10:55pm Permalink
The most annoying part of this article is the title "Silicon Valley Girl".