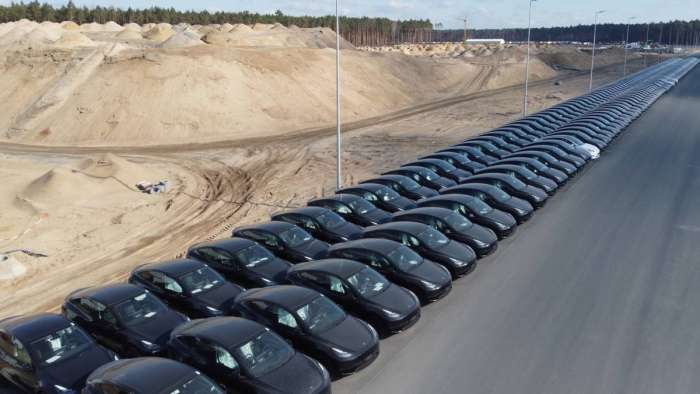 We see a picture with what looks like an endless row of Model Y vehicles at Giga Berlin. Giga Berlin is getting ready for full production in a couple weeks and it looks like it can produce around 500 vehicles per week right now and will likely get to 1,000 per week in the coming months.
Advertisement

We see a picture with what looks like an endless row of Model Y vehicles at Giga Berlin. Giga Berlin is getting ready for full production in a couple weeks and it looks like it can produce around 500 vehicles per week right now and will likely get to 1,000 per week in the coming months.

There were some questions asked on Twitter of Tobias Lindh, a native of Germany who takes frequent drone videos of Giga Berlin and is an insider knowledgeable of what is going on at Giga Berlin. The first question was about how long should production approval take and is water really an issue?

Tobias responded that this was not a separate approval, but just a few checks to be made and prove that the factory is built as is in the permit. By the way, the permit, is dozens of binders with hundreds of pages each. It's amazing that anyone can keep track of all the information needed for approval.

Tobias says that Tesla wants to have the approval process finished in about two weeks. The water situation seems to be complicated, but it isn't delaying production of vehicles. I've heard that Tesla can ramp this initial Giga Berlin factory, but that in order to build on to the factory and expand, the water situation will need to be further addressed. It's hard to reconcile in my mind the truth here, because Elon Musk said that water was plentiful several months ago while at a Giga Berlin press conference.

This long row of Model Y vehicles shows that Giga Berlin is able to pump out a lot of cars. Half of the cars they have produced will be scrapped and the other half will be made available to employees at Giga Berlin and be used as a means of transportation.

Tobias Lindh was asked if he would get one of the Model Y vehicles at Giga Berlin and he responded that he would not and that he cannot afford a Tesla...

Most of these Model Y vehicles are black and why is that? It seems that the painting process testing is best done on black paint, which will reveal any imperfections. Therefore, this long row of Model Y vehicles is likely to be test/calibration vehicles. Good ones will be used internally and the bad ones will be scrapped as mentioned before.

Someone on Twitter also joked that these test vehicles are more vehicles than Rivian and Lucid combined have produced so far. That is true, but Rivian and Lucid are still in their very beginning stages. Let's give them time to see how things play out.

I've also heard word that the Model Y long range is being built at Giga Berlin. Because the 4680 batteries aren't available yet, I expect the range and performance to be very comprable to the Model Y at Giga Shanghai and the Model Y from Fremont.

Are these Model Y vehicles going to get delivered soon? Is Giga Berlin still on track to start production by the end of March, 2022?