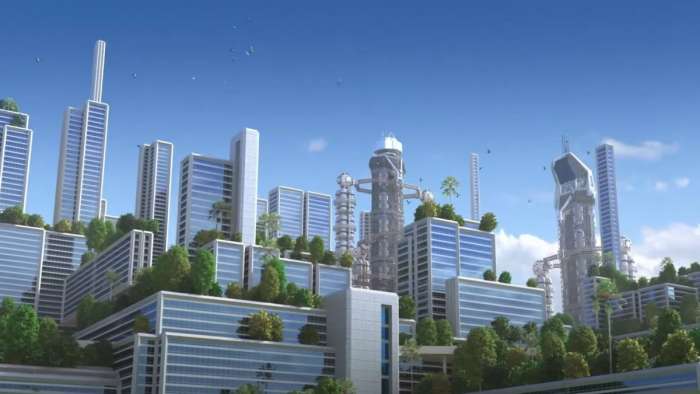 Tesla could help build the city of the future. Tesla could provide electric power and solar solutions and AI to drive autonomous vehicles all over the roads. The Boring company could be used to reduce traffic congestion, and SpaceX and Starlink could provide Internet without the need for cables.
Advertisement

Tesla will be able to have a great effect on how future cities are built. The city of the future will have charging stations for electric vehicles. Battery storage systems like Megapack will be common. And solar panels will be abundant. These are all things that Tesla specializes in.

With all the latest advances in technology we could pre-design a city with a much more advanced infrastructure. What about tomorrow's city - the city of the future. Tesla is most likely going to setup a lot of factories in Indonesia.

What if Indonesia was able to industrialize in a big way and to get rid of their traffic congestion and pollution problems. This has major negative effects on the citizens living there. Tesla could help with this. Tesla could also go to a next level.

In fact, Indonesia, with cities having 10 million people and 30 million people in Jakarta, you are starting to have an over population and a city built on a swamp with a lot of flooding. In 2050, the city is rumored to sink. More surfaces continue to sink along with skyscrapers pressing into the ground. There are 5 million cars and 13 million motorcycles driving around and coal power plants all over the place.

Jakarta will likely build a giant sea wall around the city to protect it by 2025. There are a lot of pressures on Indonesia. Indonesia and its president has decide to move the capital to the island of Borneo. This happens occasionally within a country for various reasons, including geographic location. The new capital will cost around $30 billion dollars and will be a completely brand new city.

What if the Indonesian government is willing to take a plunge with Elon Musk and let Tesla and its associated companies help build the island of Borneo to the city of the future. This would include Tesla, SpaceX, Starlink, and possibly other companies. The Boring drills may be too slow still...

There would be a massive solar farm outside the city with all homes having solar panels. There would be giant battery storage locations. There would be roads built for autonomy and the vast majority of transport would be autonomous. Starlink would provide internet from up above, negating the need for internet cables being used underground.

This could lift millions upon millions of people out of poverty and have a major impact on the world and Indonesia. There is an opportunity cost to not doing this because the act of building this city of the future would lift so many out of poverty and improve the health and productivity of so many people.

Tesla could build the infrastructure of a new city and hopefully do great at retrofitting existing cities. This would make for an electric city - everything electric and AI would handle transport and energy use. This would be a major futuristic city.

Do you think Tesla will develop the new capital of Indonesia, along with Elon Musk's associated companies? Will Tesla and Elon Musk's companies have a big impact on cities as the future continues?

Bud wrote on June 3, 2022 - 4:04pm Permalink
How do you "lift people out of poverty" by giving them [presumably government funded] piles of "stuff" they have to pay thousands of dollars (or whatever equivalent) in monthly service fees to use?