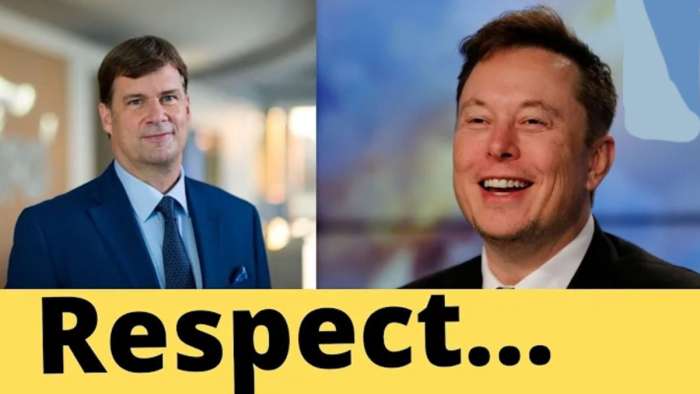 Ford and VW (Volkswagen) have given credit to Tesla for their efforts in leading the way for electric vehicles. It seems the big 3 auto makers could now be: Tesla, VW, and Ford. Let's see what's happening here.
Advertisement

Jim Farley, the CEO of Ford, publicly gave credit to Elon Musk for leading the way in electric vehicles:

Thanks for leading the way…. https://t.co/V5HpjAgl6A

There is a lot of credit to give here. Elon Musk has helped lead the charge to sustainable energy with Tesla and has all other auto makers reacting to Tesla in making electric vehicles. It's one of the biggest disruptions in a market that I've ever seen. Not since the 2007 iPhone release from Steve Jobs have we had a disruption this big.

It takes humility for someone to share the truth about someone and Jim Farley, the CEO of Ford, has done so. The question now is, where do things go from here? Will Ford and VW be able to make the transition to electric vehicles and do so profitably? Let's find out.

A Long Road Ahead

There is a long road ahead for Ford and VW. Tesla went through quite a number of growing pains as they released the original Roadster and original Model s vehicles a decade ago. Then there came the Model 3 production ramp which caused Elon Musk to put "all hands on deck" to ensure the success of the project.

Right now, Ford and VW still have their ICE (internal combustion engine) vehicles that are generating profits and sales for each of their companies. But what happens when those ICE sales begin to decline. If those companies cannot sell enough electric vehicles to make the difference, then there starts to be problems at the companies.

One of the big advantages that companies like Tesla, Nio, and Lucid Motors have is that they are already producing all electric vehicles. There is charging infrastructure being built everywhere. Ford, VW, and any other ICE vehicle manufacturers are going to have to find a way to stay in business and successfully make the transition to electric vehicles.

What Is the Solution?

I think the solution is to go all in on electric vehicles and ICE vehicle manufacturers should have done this years ago when they saw the trend starting to change. But like most things, there isn't enough incentive to do it until it looks like a big problem - because, what if you are wrong and there was no need to do it?

I think it's going to get messy for some of the legacy auto makers like GM, Ford, and VW, unless they can find a way to make the transition to electric vehicles quickly.

Tesla Giga Berlin's New Hurdle: It's Not Only the Gov't, but Now Tesla Itself
Teslas Are Sold Out Until 2023, But The Timing May Reverse
END_OF_DOCUMENT_TOKEN_TO_BE_REPLACED