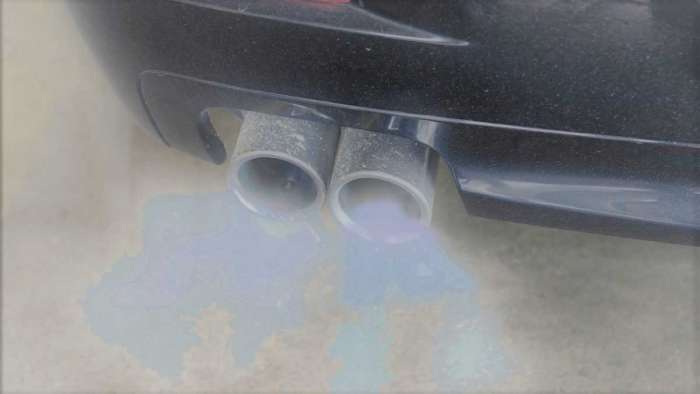 Here’s a simple fix demonstrated by a Ford mechanic where a customer comes in with a worrisome blue exhaust on start-up warning that something is not right with his engine.
Advertisement

The Blue Smoke of Death

It seems like you cannot drive down the highway without seeing at least a few vehicles puffing out blue exhaust so badly that you wonder if the owner is not aware of it or just doesn’t know (or care) that they are in for an expensive repair in the near future.

Referred to as the “Blue Smoke of Death’ in some circles of car owners, it’s the telltale sign that your car’s engine is burning oil and that you could possibly be facing some serious engine repair if not taken care of right away.

Related article: Not All Engine Oils Are Created Equal Reports This Mechanical Engineer

Here’s a very short video that explains some of the more common causes of blue smoke coming from your exhaust and what needs to be done to take care of the problem:

Despite the knot in your stomach from seeing blue smoke coming out of your exhaust, in some cases your reaction may be premature and require only a simple fix.

Related article: Ford Misfiring Engine Problem? Check This Out First Before Going to Your Mechanic

That was the message in a recent Ford Tech Makuloco YouTube channel episode where the host explains how that observing some blue exhaust coming out of your vehicle when it has a turbo installed might not be so worrisome. And in fact, can be a simple DIY fix for the mechanically inclined Ford F150 truck owner with the EcoBoost 2.7L engine.

According to the host, problematic EcoBoost engines from 2018-2020 commonly experience blue smoke coming from the exhaust upon startup after the vehicle has been sitting overnight in your garage or driveway.

Here is a short and very instructive video of the problem and the fix that is recommended to make your blue smoke problem go away.

For additional articles about diagnoses and repairs of Ford engines from the host of the shown video, here are a few informative ones to watch and learn from:

COMING UP NEXT: Consumer Reports Popular Cars to Avoid and What to Buy Instead Recommendations

Tesla Contemplates A New Strategy for China Retail even As Sales Boom
Jay Leno on Elon Musk & EVs: “I Think He Should Get ... Credit"
END_OF_DOCUMENT_TOKEN_TO_BE_REPLACED