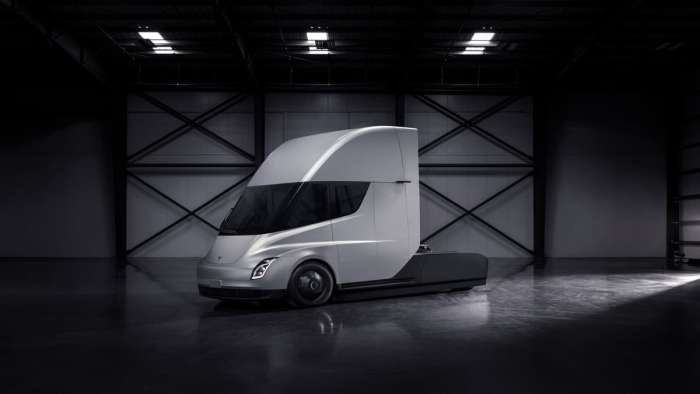 The all-new Semi truck is unlike any other that’s ever been made, and it’s certainly different than any other Tesla. President of Tesla’s heavy trucking division Jerome Guillen announced Tesla is looking for service technicians.
Advertisement

This is probably a good idea for Tesla to be getting the service team in place now. This is obviously a Semi truck we’re talking about, but many car buyers are reluctant to buy a car the first year it comes out. This is because it’s a new model which often means some of the underlying mechanical issues haven’t been worked out. Tesla is looking for service technicians to work in California and Nevada at the moment.

The positions currently available consist mainly of service technician roles. There is one job opening for a process technician position. Tesla is looking for people who have experience servicing heavy trucks. Even if someone has experience with other heavy trucks, the Semi seems to be a different kind of animal so to speak.

The job descriptions are important because they give a clue as to how Tesla plans to run their service program for the Semi. The service technicians will work alongside the engineering and product development teams. The service technicians will make suggestions and then the engineering and product development teams will go back to the drawing board to fix an issue if that’s what’s needed. Tesla has a plethora of service centers throughout the United States. It appears that Tesla is going to gradually phase in those who will be working on the Semi into these various locations. Tesla is doing that by starting the recruiting process for service facilities in California, Nevada, and for another location in Ontario.

What we need to see from the Semi

In terms of Semi trucks, braking and handling are critically important. The biggest advantage the Semi has is that it has no gears. This will alleviate some headache for truck drivers because they won’t have to worry about downshifting every time a steep hill is encountered. Tesla has equipped the Semi with regenerative braking, and many have said it is unclear just how well it will work. That being said, the Semi having no gears makes things much less complicated.

The one thing Tesla must watch out for

The Tesla Semi is said to be equipped with a version of enhanced autopilot. This will help drivers stay rested on long trips because they will be expending less energy trying to keep a big truck in its lane. Keeping a semi well centered in its lane is much harder than it looks. There shouldn’t be any issues with the service technicians working on autopilot because they’ve done it before. However, autopilot comes with a caveat. Tesla can help address this caveat by getting on the regulators and truck companies. Drivers need to know when they can or cannot use autopilot. The Semi is wider than a typical Tesla car by a lot, so on the tighter roads it may be somewhat unsafe to have the Semi in autopilot.

A Semi is more risky

The good news is that there will be more oversight with these truck drivers. The reason why all this is important is because Tesla has received a lot of bad media attention that was unjustified due to bad accidents that may or may not have involved autopilot. The reality is that if a semi crashes, it is capable of causing more injuries and death than a small car. For example, if a Semi crashes and manages to cause a pileup killing 10 or so people, then that would make the news. If the truck was found to be on autopilot, then autopilot would be blamed regardless of whether it caused the crash. This could lead to a lot of lawsuits potentially. Again, the good news is that truck drivers are closely monitored. Many truck drivers don’t like how trucking has become so regulated, and rightly so. However, Tesla is in a situation where people demand that autopilot causes zero deaths.