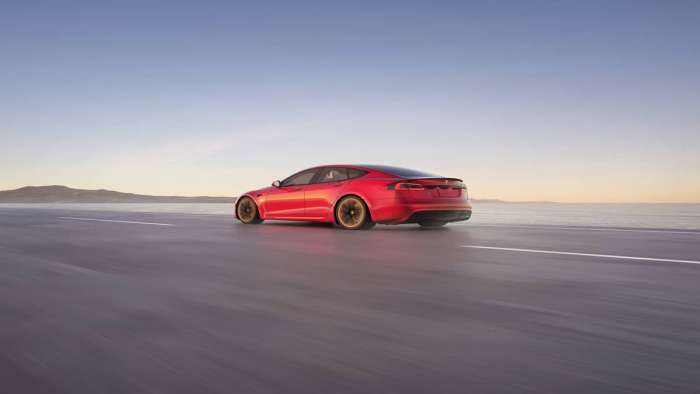 Tesla Owner Reports That His Model S Did 250,000 Miles On One Set Of Brake Pads

This is an impressive number of miles especially when compared to any other car. There are many factors that could have led to good brake durability in this instance.
Advertisement

A Tesla owner named Nigel Raynard reported that his 2018 Model S was able to drive 250,000 miles on one set of brake pads. This may be seen by some as a claim that should be taken with a grain of salt. Claims should be taken with a grain of salt until all the evidence comes out. In this particular case, other Tesla owners and fans have been chiming in on reddit with their own hypotheses as to what helped this Tesla owners' brake pads to hold up for 250,000 miles.

The brake pads were not replaced on Raynard’s car, but other items were replaced. These items include the driveshaft and air con compressor. However, these two items lasted over 200,000 miles before needing to be replaced. Raynard did say that a lot of his driving was on highways, but this is still an impressive feat, nonetheless.

Raynard did give credit to Tesla’s regenerative braking system. He said, “the thing is you’re hardly ever braking.”
EV’s also have no gears. An automatic transmission car doesn't always shift into really low gears.

The reaction to Raynard’s experience

Many of the comments said that it was the regenerative braking that caused the brake pads to be preserved for so long. Even though regenerative braking is part of the equation, it seems almost unheard of that a car would go a staggering 250,000 miles on one set of brake pads. One commenter said that the electric motor helps with the rear brakes which results in less force being put on them compared to the front brakes. Another commenter said that the brakes need to be used or else rust could build up.

Other commenters mentioned the Toyota Camry hybrid. One owner said that their Camry had over 220,000 miles on it with the original brakes. It is not clear if they meant to say brake pads because replacing the whole brake is different than just replacing brake pads. Based on reading these comments, it seemed that Toyota was thought of as the best at preserving brake pads as far as gasoline cars go.

Brake pad life is also determined by how aggressively someone drives. If a car is driven by a driver who is hard on the gas and also hard on the brake, then the brake pad will wear out more quickly.

This is a great story, but it does seem like an outlier. A distance of 250,000 miles on one set of brake pads is not something that is doable for most people. It also would be interesting to know how improvements made to Tesla vehicles in more recent years could lead to longer brake pad life.

Tesla has been working on making its vehicles lighter and more agile. It would be helpful to hear from more Tesla owners so that we can know what to expect in terms of brake pad wear based on the year and amount of miles on a given car.