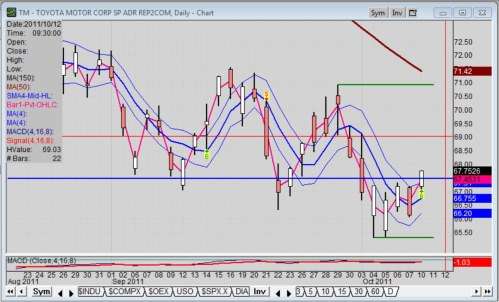 Despite news about the 2012 Camry debut and the plans to diversify location of key part production around the globe, Toyota stock opened higher this morning which was trading last week near or just below its key price resistance area of 67.56 set in September, 2010 and well below its 50-day moving average.
Advertisement

It wasn’t that long ago that traders wondered if Toyota would even test the 67.56 price level, deemed a major price support area in 2010. Now that the area has been officially tested and broken, Toyota stock seems to have trouble breaking back above it with any conviction. This morning's higher open, though, could be promising.

Toyota stock then swung lower below the 67.56 support once again, and since that time has stayed there and created a new 52-week low of 65.30.

For the record, according to the general rules of technical analysis, previous support levels become overhead resistance whenever they are breached; and previous resistance levels tend to become support when broken above it. Problem is, anytime a stock does the old break above then break back below only lower means great uncertainty. The bulls and bears are in a major battle as to who will lead.

Fact is, most auto stocks have been led mostly by the powers of the general market, which has been pressured heavily by the economic and sovereign debt news of Europe and the BRIC nations.

This is partially why I questioned the wisdom of drawing out the time by making parts abroad in the Japanese vernacular would mean manufacturing those parts in the United States for a change. Fact is, Toyota Motor Corp. (NYSE: TM) aims to start overseas production of key parts in three to four years. Why so long?

Still, I watch price dynamics and simply cannot divine anything much beyond a week to a month. Recall what I wrote a few weeks ago: “Nonetheless, life goes on as it did over the past few weeks, when Toyota stock tested a low set as far back as September 2010 in the 67.56 area. Question is, will that support hold the next time the general market goes south? After all, no auto stock, Toyota included, seems to have the power to go against that magnitude of general market trend should it strike again.”

It seems that assessment was spot on.

As far as the 2012 Camry is concerned, there has been no real news since its debut. Only time will tell if Toyota will get its mojo back in sales. After all, it led in sales for many, many years until the bad news hit about quality issues led mostly by the accelerator problems.

In the meantime, all traders can do is watch the general market for signs of strengthening. Take this morning, for example. The general market reacted favorably to supposed news in Europe, which can change overnight anyway, but a weekend pledge by French and German leaders to devise a definitive plan by early November had positive overtones.

The fact that Toyota stock opened higher this morning is good news, but that was on general market news mostly; and may not be enough to hang a bet on, though. Something underlying is crippling TM stock traders these days. If you know, speak up here in the comments; as I’m open for theories.

Nonetheless, I prefer technical analysis over fundamental theories to time stock purchases and sell orders. I’ll let the chart action tell me what to do; and up til now that was a hold and create no new longs on Toyota until confirmed by higher highs, higher lows, but more so if they trigger a break above that 67.56 level on heavy volume. And by 11 a.m. this morning, we may witnessed little light with a breakout above the 5-day high-low channel.

Still, for you long-term home gamers, be apprised that Toyota is under its 50-day moving average and has been since late July. Also, watch that 65.30 as it is now officially short-term price support.

Nonetheless, my own 5-day channel system shown on the image has a TM breakout out of the channel. I would equate this as a potential long in the bullish direction, but as a short-term swing trade only. That's how I have to think these days with all the uncertainty, otherwise I don't sleep well.

Tsingshan's Threat to Tesla: EV Maker Is In Battery Crosshairs
Tesla-Funded Research Reveals One of The Biggest Mysteries of EV Battery
END_OF_DOCUMENT_TOKEN_TO_BE_REPLACED