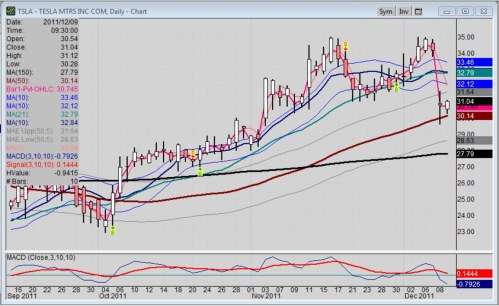 Despite a short-squeeze breakout to the upside that started in early October, Tesla Motors (Nasdaq: TSLA) stock reacted negatively this past week to more than just news about a downgrade by Morgan Stanley.
Advertisement

The downgrade of Tesla Motors stock (Nasdaq: TSLA) from Overweight to Underweight by Morgan Stanley which also slashed the price target from $70 to $44 ran a lot deeper than just a quarterly expectation. The firm also stated that electric cars are not ready for prime time.

For the record, this reporter has been saying that for some time, but on the basis of cost to the public, not necessarily technology or safety.

As I have written many times before, technical moves in a stock end like all things, but any new fundamental news can provide new support. Unfortunately in this case, support will have to be addressed at a lower price.

I am looking for consolation for my choice last week. I bought $8k of Tesla at $27 in July/August. I kicked myself for not waiting ONE MORE DAY, when it dropped to $24, but I had been waiting for it to drop from $29. I love this stock and am very hopeful for its future, especially next year when their new car comes out.

I probably made a rookie mistake because this is my first stock purchase, but I sold at $30.25 to pull some money out, trusting that it would have time to drop again before next year.

I am, again, kicking myself as I am watching it rise after release of its 3rd q earnings. I am left wondering if it will ever go back down again, when my plan was to buy back.

In light of the 3rd q, do YOU think it will ever see $27 or less again before the release of the car?

Looking Behind My Reply

When it comes to stocks, I often look at two charts, the weekly and the daily. In the case of the weekly chart on TSLA, notice the 50-week moving average is at 26.81. Stocks often return to their mean or average, but that may take months or years. Then again, in this volatile market, anything can happen; and in this case of TSLA, it did.

In light of the Morgan Stanley downgrade, the black swan has indeed appeared, but the pullback at this point seems within the realm of average pullback volatility after a breakout, especially after a short squeeze. So my thoughts that chasing the stock was not a good idea now looks to have been on solid ground.

Nevertheless, let's once again view what else the weekly chart at minimum is telling us right now: Overhead resistance is still unchallenged at 36.42, the Nov. 2010 high. And the May, 2011 high of 31.50 which was passed recently has been broken on the downside with Friday‘s close of 31.04. And that is just above the 50-week moving average of 30.14.

On the daily chart, though, I personally use a 50-day moving average, a 150 day MA and a 21 day MA. In addition, I also use a 5 or 7-day high-low simple moving average channel.

Right now, TSLA still has a bullish trend bias as the 50 day MA is still above the 150 day MA. Question now is, is this particular downgrade of significant magnitude to warrant further down pressure on price? In other words, is this news a strong enough catalyst to drive the stock even lower?

Bottom line for me at the timeof the incoming letter was that I did not know how far TSLA would run; and neither did anyone else. That is precisely why I prefer to think in terms of probabilities, because that’s the closest to the truth I can ever get ahead of reality.

And probability always reminds me that I never know for sure what a stock will do, but as a believer in historical patterns, I do know that eventually a pullback to some level is in order; to what level I do not know beyond shadow of doubt either; but I often find buyer support at the daily channel and at the recently broken resistance level. In the case of Tesla stock, the daily channel was breached big time.

The person who wrote the letter insisted on my opinion on whether TSLA would return to 27 level. Of course, I replied that it could, and likely would, but not in a timeframe that I could bet on.

In this case of probabilities, though, the fundamental opinion went far beyond the company, Tesla. It covered the entire EV industry; and that, in my opinion, is a different kind of catalyst.

Perhaps the Chevy Volt fire after a NHTSA test, which wasn’t a real-world scenario, had a lot to do with Morgan’s industry assessment. In that respect, I prefer to let the market action tell me if they fully believe that Morgan Stanley assessment.

Recall that I wrote a few weeks ago, what you need to ask yourself now is, what is driving the stock higher now? Well, you need to reverse that logic. What is driving and likely continue to drive the stock lower? And in this case, the Morgan Stanley downgrade is driving far more perceptions than newTesla orders.

When this latest bear catalyst dies out, then TSLA may return to higher highs and higher lows, with key emphasis on the word “may.”

Yet, just as the option squeeze provided the catalyst for the upside breakout, so has the Morgan Stanley downgrade on the EV industry; and that‘s a macro statement that affects far more than just Tesla.

Just remember that TSLA has no earnings, only potential for earnings right now; and, right or wrong, that potential has just been challenged on two major fronts - lithium battery safety and industry growth.

Maria wrote on December 18, 2011 - 2:34pm Permalink
So the possibility exists that it might go either way. And these people actually get paid to make these predictions???