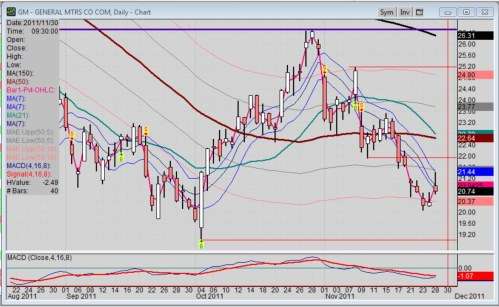 Perhaps investors in General Motors Company (NYSE: GM) stock realized the company isn’t hiding like Toyota did a few years ago, but is taking on the negative press of the NHTSA investigation into a fire with a Chevy Volt after it was compromised by a NHTSA crash test.
Advertisement

On the surface, one might call the situation the result of a lack of protocol rather than some concocted design flaw. Fact is, any lithium-ion battery can catch fire if it is compromised in a crash, because lithium has an unstable nature to it.

Recall that Apple Computer (Nasdaq: APPL) along with every other computer manufacturer had to contend with the potential of a laptop catching fire. It comes with any chemistry that uses lithium.

For the record, a letter was sent by General Motors' President of GM North America, Mark Reuss, to Volt owners which a few excerpts here revealed the following:

Here are the facts behind the most recent news articles. In May, the NHTSA ran one of its most-severe crash tests at a test facility in Wisconsin. The Volt battery was damaged and the coolant line was ruptured. Three weeks later, an electrical fire involving the test vehicle occurred.

We are aware of no real-world consumer incidents that have produced a similar result. These recent tests show a very rare set of circumstances: A severe impact resulting in the battery and coolant lines being compromised. And then the passing of a significant amount of time before an electrical fire may take place.

It’s even more surprising that NHTSA which runs its own national testing laboratories wouldn’t have known that any crash with a lithium-ion battery has the potential for a fire no less than when a coolant or fuel line is ruptured after a crash test in a standard IC engine vehicle. In fact, GM already had safety protocols that defined the need for the full discharge of the battery after a severe crash.

Of course, the investigation is ongoing. So, it would be unfair to assume anything right now, except to accept the facts as they are revealed.

The news of the investigation was already out before the market opened this morning. Still, GM stock opened higher; so that was positive. Then GM held its teleconference with the media, which revealed greater details that automatically extracted deeper quetions by the media. It also availed a plan by GM to allow owners who may be worried to get a loaner until this issue is fully resolved.

One can see GM wants this issue defined and corrected immediately; and that is precisely how this investor took the news. However, the market went up and GM stock settled lower than its open, but still higher than Friday when the NHTSA announcement came out.

TorqueNews will monitor the news as well as the price action of the stock, and will report if the news affects a price move in any way.