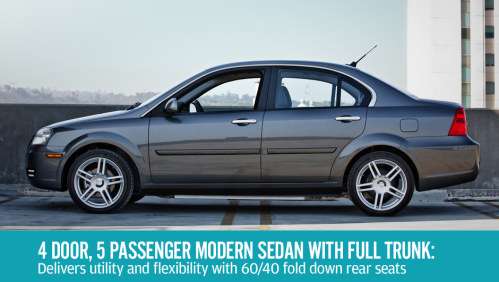 Watch out, Detroit. You may not have heard of CODA Automotive, but the company’s presence at the 2011 LA Auto Show proves that electric vehicles can indeed fit five people comfortably in a sedan category and still provide a 150 mile range.
Advertisement

Thanks to Armen Hareyan, TorqueNews editor-in-chief who is on assignment at the LA Auto Show, we heard first hand about the objectives, the car, the range and the cost.

You read that right, though. The CODA is 4-door, 5-passenger sedan; and it’s a fully electric vehicle with a 150 mile range.

For the record, CODA has what Sloustcher calls, “an over-arching mission.” That mission is to place an EV in every garage in the world. He went on to say the vehicle is not only fully electric, but an accessible vehicle in that it seats five.

Thomas Housch then spoke with Armen about the power of the vehicle. It has 100kW electric motor which equates to 136 horsepower. Top speed is electronically limited to 85 miles per hour. While it could be programmed for greater upper speed, Housch indicated it would come at a cost of less driving range.

Regarding charge time, the CODA is Level-2 capable, which means 220 Volts. Housch noted you can get a 50 mile charge in 2 hours, when most require 4 hours for that same level of charge; and the full 150 mile charges in 6 hours.

Then came the one question that everyone wants to know: How much will the CODA automobile cost?

Housch quickly noted the cost will be $29,900. At first, when this reporter heard that number on the audio interview, I paused and thought that was before subsidies, but that is after subsidies. As it works out, Housch later stated the MSRP as $39,900 which agrees with the website. However the site states there is a destination cost of $895.

Then you subtract $2500 for California subsidy plus another $7500 federal subsidy. That total of $10,000 in subsidies is what brings the net cost to the buyer to the $29, 900 level plus destination cost, of course.

In Michigan, I assume the cost would be $2500 higher, as this state does not have any subsidy funds to give away.

Armen also photographed the vehicle at the CODA Automotive booth (#406), which will appear here as they are processed. However, you may garner additional information at the company website, http://www.CODAautomotive.com

So it looks like the timing of the government news release and the CODA electric automobile’s presence at the LA Auto Show is no mere coincidence. After all, California plans to issue its proposal for model year 2017-2025 vehicle greenhouse gas standards on December 7 and will finalize its standards in January.

Note: TorqueNews editor-in-chief, Armen Hareyan, is still on assignment in Los Angeles. So, be sure to visit TorqueNews.com often as we will be updating you with his reports and photos on the latest from the LA Auto Show.