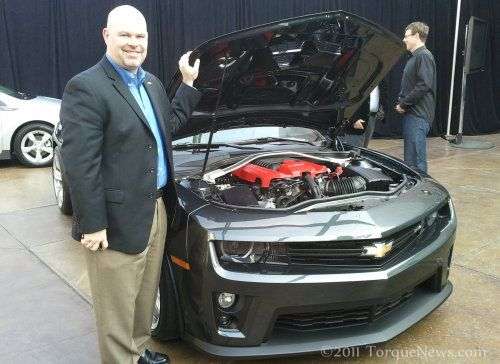 Ahead of the LA Auto Show whereby press days start tomorrow, Torque News Editor-in-Chief, Armen Hareyan, spent some quality time at the Chevrolet J Lounge for an interview with John Fitzpatrick, Marketing Manager for Chevrolet Performace Cars that includes the Chevolet Camaro and Corvette. He spoke specifically about the Chevrolet Camaro ZL1.
Advertisement

According to Armen, it was a nice restaurant in downtown LA, not too far from the Omni hotel, where most of the LA Auto Show people are staying. The interview occurred in the outside sitting area of the restaurant, where there were light refreshments and few Chevy cars on display: 2012 ZL1, Sonic, Spark, Volt.

Torque News had a list of questions that the team deemed important, but the interview setting turned into more of an interaction with both Chevy team members and the vehicles. Those questions are still scheduled and expected to be answered during press days.

First words that came from John Fitzpatrick, marketing manager for Chevrolet Performace Cars that includes the Chevolet Camaro and Corvette, actually set the tone. He said, “The objective for the ZL1 was to take a great Camaro to another level.”

Fitzpatrick also stated the task required more than just putting a blower on top of the manifold. Other performance amenities were deemed crucial, like magnetic ride control, performance traction management, a high-performing automatic transmission in conjunction with a stiffer body.

According to Fitzpatrick, “We targeted the customer that knows the Camaro heritage.”

Of course, even Fitzpatrick admitted the cost of the 2012 Camaro ZL1 is expensive at $54,995. However, Fitzpatrick also pointed out that you get great performance, like "3.9 seconds with an auto trans."

A few key words that stuck out in the interview were terms like, “supercar performance,“ but Fitzpatrick specifically stated “supercar performance at a reasonable, attainable price. Considering the cost of other supercars, like that from Porsche, the Chevrolet Camaro marketing manager felt the Camaro represented great value.

Be sure to check out the photo galleries of the 2012 Camaro ZL1, just below the main article photo

And since Armen Hareyan will remain on station in Los Angeles, stay tuned to Torque News for more coverage of the 2011 LA Auto Show.