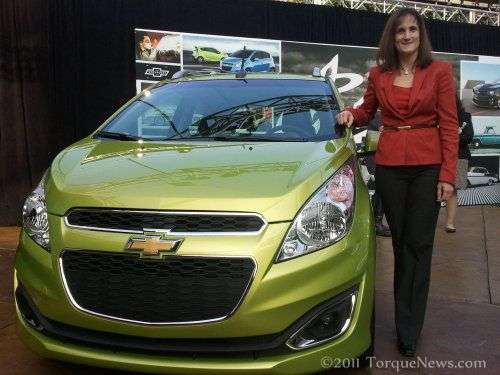 Chevrolet marketing director for the Spark, Christi Landy, spoke with Torque News editor-in-chief, Armen Hareyan, for the debut of the 2013 Chevy Spark at the 2011 LA Auto Show.
Advertisement

In the same setting where a few Chevy cars were on display, like the 2012 ZL1, Sonic, 2013 Spark and Volt, the interview with Christi Landy, Chevrolet marketing director for the Chevy Spark, took place just outside the sitting area of a restaurant in downtown LA, not too far from the Omni hotel, where most of the LA Auto Show people are staying.

Armen was quick to ask a detailed question that would literally spark a barrage of details about the newest vehicle for General Motors that is making its way into the U.S. market out of South Korea: the 2013 Chevrolet Spark.

Ms. Landy immediately noted the GM mantra that says the company intends to build the best vehicles in the world. In this case, the Chevy Spark is coming from one of its key engineering and vehicle development groups out of South Korea.

First there was the Chevy Cruze, then the Chevy Sonic. Now GM will have available in summer of 2013 the Chevy Spark.

For the record, the Spark is the smallest of the lineup, with a classification in the mini-segment.

The usual marketing words came through as expected, like “exciting, fun, personality and playful colors.” However, the details from Landy fit the billing it seemed, especially when it came to colors.

The color lineup for the 2013 Chevy Spark will include: jalapeno (green), lemonade (yellow), salsa (red), denim (blue) and, a real hit in South Korea, techno-pink (silvery pink). In fact, it is the best selling color in South Korea. Of course, well traditional hues such as Grey Area, Black Granite, Silver Ice and Summit White will also be available.

On the technical front, the 2013 Chevy Spark will hit the U.S. dealers with refreshed front and rear fascias, a revised center console that has cupholders, a requirement for the U.S. market, plus ten air bags and 15 inch alloy wheels.

Target market will be city drivers, including the millennial generation, who will especially like the 7 inch touch screen. According to the news release already available, the 2013 Chevrolet Spark mini car, to be revealed Wednesday, November 16th at the Los Angeles International Auto Show, is the only car in its segment to offer a seven-inch color touch screen radio capable of displaying smart phone-based navigation, media and contacts for hands-free calling.

According to Landy, that means it will be compatible with Pandora for pics and apps, whereby the navigation screen will accommodate a nav app on a small phone, making it a new nav experience for the U.S market.

When asked about price, Landy could not say much except that it will be below the cost for the Chevy Sonic which sells for $14,495.

Armen also asked about MPG rating, but, again, Landy could not state anything as Chevy is still waiting for the official numbers from the EPA.

After the interview, Armen reported an electric version of the Spark concept is coming next summer; and Chevy has yet to target when a Spark EV will be unveiled. Perhaps the North American International Auto Show in January, 2012 in Detroit, but that is merely conjecture at this point.

Be sure to check out the photo galleries of the 2013 Chevy Spark, just below the main article photo

And since Armen Hareyan will remain on station in Los Angeles, stay tuned to Torque News for more coverage of the 2011 LA Auto Show.

Toyota vs Tesla: Which Stock To Buy These Days
For Some Former Daimler Managers Daimler Is Authority, While Tesla Is Like a Startup
END_OF_DOCUMENT_TOKEN_TO_BE_REPLACED