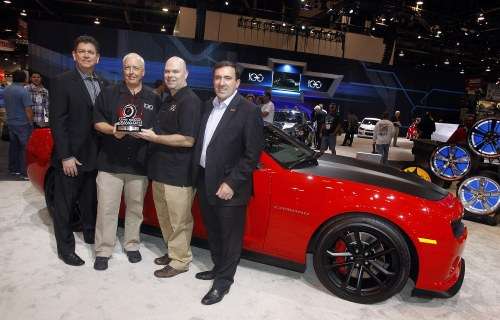 With Torque News’ senior editor, Patrick Rall, having a great time in Las Vegas already covering the SEMA Show, it's time to see what the OEMs are reporting from their end here in Detroit area. Well, it looks like the Chevrolet Camaro as "hottest car" now makes the brand even more proud as General Motors’ poster boy.
Advertisement

For the second year in a row, the Chevrolet Camaro is the “hottest car” at the SEMA Show in Las Vegas. The SEMA Award recognizes the most accessory-friendly vehicle, based on the volume of aftermarket parts exhibited at the annual showcase of automotive performance and personalization.

The SEMA Award was first handed out in 2010, which not only makes Camaro a two-time winner, but the only car to receive the award. Its selection reflects the aftermarket industry’s enthusiasm and continued investment in America’s most popular sports car.
Camaro posted 6,119 sales in October, again leading the segment and topping the next-closest competitor nine of 10 months so far in 2011 – with sales up nearly 7 percent in the first 10 months of this year.

“After more than two years on the market, the Camaro continues to inspire creativity and Chevrolet is thrilled to see that expressed in all the wonderfully personalized examples here at the SEMA Show,” said Chris Perry, vice president, Global Chevrolet Marketing and Strategy. “Camaro has always been a car customers love to personalize and we are doing all we can to support them and the aftermarket industry with parts and accessories that help turn their dreams into reality.”

Along with the examples displayed by aftermarket manufacturers and customizers at the SEMA Show, Chevrolet brought its own contingent of customized Camaro concepts to Las Vegas, demonstrating the diverse range of personalization and performance possibilities. They include:

COPO Camaro – A conceptual exploration of a factory-built Stock Eliminator race car and the spiritual successor to the legendary special-order models from 1969.

Camaro Hot Wheels® – This full-scale interpretation of a Hot Wheels toy is inspired by the “Custom Camaro” model, which was part of the original release of 16 Hot Wheels toys in 1968 – including a modern take on the chrome-style “Spectraflame” exterior finish.

Camaro Red Zone – A design statement in the new-for-2012 Crystal Claret exterior color and achieved with current and future accessories – and it debuts a new, heritage-inspired stripe graphic that will be available soon.

Camaro Synergy Series Concept – Using the best of the best Camaro accessories matched with a distinctive silver exterior with red accents, it’s the latest in the Synergy concepts that have debuted at SEMA. Chevrolet will be listening to the reaction it receives at SEMA, as it could be brought to production.

Camaro 1LE Concept – The legendary 1LE designation returns to the Camaro as a concept intended to carve up road courses. While only a concept, it borrows production components from both the Camaro SS and forthcoming Camaro ZL1 to deliver a competition-ready package.

Camaro ZL1 Carbon Concept – This concept incorporates all the technology and performance of the Camaro ZL1 – which goes on sale in 2012 – with an added layer of carbon fiber to add a decidedly sinister-looking element of form to a car that’s all about function.

Despite all the media buzz about green and EVs, Chevrolet is not letting go of its performance image one iota.

So, be sure to return often to TorqueNews.com as Patrick Rall reports on the live events at SEMA. Also be sure to check out his photo sets or thumbnails, as I regard Patrick as one the of the better photographers; in fact, that’s how we first met at the NAIAS in Detroit.

Again, stay tuned to TorqueNews.com for continuing coverage by Patrick Rall from the 2011 SEMA Show in Las Vegas!