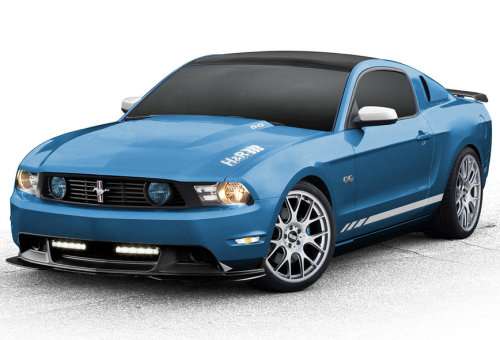 So far, Ford Motor Company has offered up a look at the F Series pickups, the Explorers, the Foci and the Fiestas that will be decked out for the 2011 SEMA Show but since no performance show would be complete with the mighty Mustang – today we have a preview of the Ford muscle cars headed to the Las Vegas show next week.
Advertisement

While we would be absolutely stunned not to see more than four modified Mustangs in the massive Ford display at the 2011 SEMA Show, FoMoCo has offered up a quartet of pony cars which will be in attendance next week. Since high performance is the key aspect of the SEMA Show, we will probably see a couple Mustangs worked over specifically with Ford accessories but the models that have been teased ahead of the show have been customized with third party help including Forgiato Wheels, Creations n' Chrome, H&R Springs and MRT Performance.

The folks at MRT Performance have made quite a name for themselves in the Ford tuning world and the 2012 Ford Mustang that they modified for SEMA looks to culminate many of their abilities into one great looking show car. MRT began by adding gobs more power with a ProCharger supercharger package, MRT stainless steel exhaust and an H&R suspension kit while the MRT custom hood, black and gold paint scheme and body kit add an some style on the outside.

Forgiato wheels went for a heavy appearance alteration with their 2011 SEMA Show Mustang GT show car, with three-piece 21” wheels up front and 22” wheels in the back, all of which are tucked under a TS Designs wide body kit finished in matte pearl silver PPG paint. Under the hood, the power of the Ford 5.0 is boosted with help from a Vortech supercharger package and based on the stance, it looks like there might be some unmentioned suspension work as well.

Last but not least is the 2012 Ford Mustang design by H&R Springs (shown above on the right). H&R used a Street Scene Equipment body kit to give their Mustang GT the look of the new Boss 302 up front while a unique blue paint scheme, plenty of badging and a set of BBS wheels wrapped in Pirelli P Zero performance tires finish off the exterior. H&R is well known for their high performance handling components so this Mustang GT is clad with the latest and greatest, including H&R Springs Coil RSS sport suspension, front and rear sway bars and Triple C camber adjustment bolts. The power output of this Mustang is aided by an Edelbrock E-Force supercharger and a Flowmaster stainless steel exhaust setup.

Renderings of all four of these gorgeous 2012 Ford Mustang models are available in the gallery on the right and next week, you can expect high resolution images of these and all of the other vehicles at the Ford display of the 2011 SEMA Show right here at TorqueNews.com

hid conversion kit wrote on November 4, 2011 - 7:37am Permalink
Thanks for taking the time to discuss about this, I feel strongly about it and love learning more on this topic. If possible, would you mind updating your blog with more information? It is extremely helpful for me.http://xenonhid4u.co.uk/