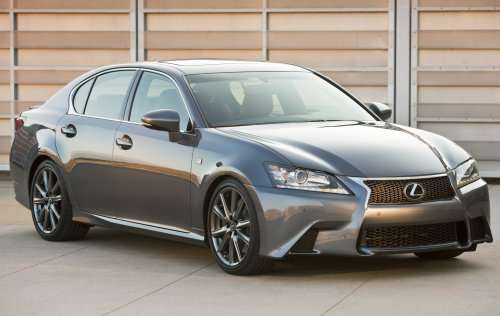 Toyota’s luxury brand will use the 2011 SEMA Show to unveiled the new 2013 Lexus GS350 with the high performance F Sport package – adding an aggressive look along with improved handling and braking capabilities to the newly refined luxury sedan.
Advertisement

The alterations made to the 2013 Lexus GS350 F Sport are most evident on the outside as the luxury sport sedan is enhanced by a new front fascia, a unique rear fascia, a low profile spoiler and package-specific F Sport badging. While the GS350 F Sport front and rear fascia go a very long way in making the Lexus sedan far more aggressive looking, company engineers made sure that these new body panels also helped to enhance the performance. The front fascia includes added openings to aid in engine cooling while also reducing the coefficient of drag and out back, the lower rear fascia treatment is designed to precisely direct the air flow exiting the underside of the GS350 – with much of the design cues borrowed from the Lexus LFA supercar.

The 2013 Lexus GS350 F Sport will be available in three existing colors including Starfire Pearl (white), Nebula Gray Pearl (Dark Silver) and Obsidian (Black) while also coming with two new paint options - Riviera Red and Liquid Platinum. Riviera Red is said to have glass flakes in the paint that help to make the paint more “brilliant” while the new Liquid Platinum option is developed with Lexus’ new coating technology that will offer a new level of shine to this sporty sedan.

Inside, the 2013 Lexus GS350 F Sport includes a unique layout that includes aluminum trim, perforated leather, a black headliner and F Sport badging on the steering wheel. The seats of the GS350 F Sport are taken from the high performance world, with a driver’s seat that includes side bolsters, thigh support and four way lumbar support – in total offering 16 different adjustments for the driver to make sure that he or she is as comfortable as possible when enjoying the GS350 F Sport. Also, for those who want a truly unique interior, a new Cabernet Red leather interior will be offered.

While the 2013 Lexus GS350 F Sport looks great, the bigger news is the level of performance modifications made to this new sport sedan. The GS350 F Sport uses the same 3.5L V6 as the traditional GS350 sedans, offering 306 horsepower and 277lb-ft of torque with the power channeled to the rear wheels by means of a six speed automatic transmission controlled by steering wheel mounted paddle shifters. For those who want more grip and versatility out of their 2013 GS350, buyers can also opt for the advanced all wheel drive system with the new F Sport package.

The handling and braking capabilities are where the 2013 Lexus GS350 F Sport really shines thanks to staggered 19” wheels, F SPORT-tuned Adaptive Variable Suspension (AVS), thicker anti-roll bars than the standard GS350, and larger front brakes with special high friction pads. Rear wheel drive GS350 F Sport models receive the 19” staggered wheels and Variable Gear Ratio Steering (VGRS) while all wheel drive models do not have the staggered wheels although they still get F Sport unique 19” wheels. Also, the GS350 F Sport will offer the new Lexus Dynamic Handling system with Dynamic Rear Steering; a system that works in conjunction with the electric power steering and variable gear ratio systems to offer a more engaging driving experience along with improving handling.

Check out the gallery on the right for a look at the 2013 Lexus GS350 F Sport and stay tuned to TorqueNews.com for complete coverage of the 2011 SEMA Show in Las Vegas!