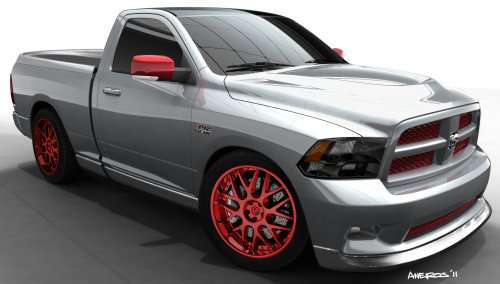 Earlier this year, I had a chance to speak with SRT CEO Ralph Gilles about the possibility of seeing an SRT-powered Ram in the future and while he couldn’t offer any future product plans, the Ram 392 Quick Silver coming to the 2011 SEMA Show could be a preview of “what could be” if Gilles’ SRT engineers were to build a Ram 1500 of their own.
Advertisement

As the name denotes, the Ram 392 Quick Silver is powered by the same 6.4L, 392 cubic inch Hemi V8 that is found in the current SRT8 line that includes the Dodge Challenger, the Dodge Charger, and the Chrysler 300C. In those applications, the 392 Hemi churns out 470 horsepower and 470lb-ft of torque and so would the Ram 392 Quick Silver if not for the tuning efforts that include headers, a full exhaust system and a cold air intake kit. Although the final power output has not yet been announced, rumors suggest that the power output of the 392 in this Ram 1500 could be up into the 500hp range – if not higher.

The base vehicle for the Ram 392 Quick Silver project was a production level Ram 1500 R/T but the folks at Mopar Underground ripped out the standard 390hp 5.7 Hemi in favor of the modified 6.4L, with the power channeled to the rear wheels via an automatic transmission with a high stall torque convertor. Once all of that power was packed under the hood, Mopar added a Brembo big brake package with 15” rotors and a custom suspension setup that drops the truck around 2” and improves the handling of this awesome sport truck. Capping off the performance aspect while also enhancing the looks is a set of 22” HRE wheels wrapped in 275/45R22 high performance tires up front and 305/40R22 skins out back.

The exterior of the Ram 392 Quick Silver has been dressed up with a unique paint scheme on the Mopar body kit, the hard tonneau cover with an integrated spoiler and the new SRT-inspired aluminum hood. Inside, Katzkin leather seats with contrasting trim makes for a great looking sporty interior design and like any good SRT product, there is a high performance Kicker sound system.

If Ralph Gilles and his band of high performance engineers were to build an SRT-level Ram 1500 pickup, this is very likely what it would look like on the outside and under the hood. While we might expect some more aggressive exterior styling cues but for the most part, this truck just oozes Mopar machismo.

Only the single picture on the right side was included with the announcement of the new Ram 392 Quick Silver headed to SEMA but you can rest assured that you will find a plethora of images here at TorqueNews of this incredible new sport truck.

Gina wrote on November 1, 2011 - 6:25pm Permalink
Come visit Bak Industries' SEMA booth #31091 this week to see our new tonneau covers! The RazorBaktm, composed of interlocking metal slates with a vinyl overlay, represents a whole new category of tonneau cover, the hard roll-up. By re-engineering the tonneau cover hinges on the all-new Endura, Bak Industries has created the most secure and water-tight tonneau cover on the market. We are very excited about these new covers! Please stop by our booth #31091 to see them and speak with Julian Maimin, Ivan Maimin and Charly Henley.