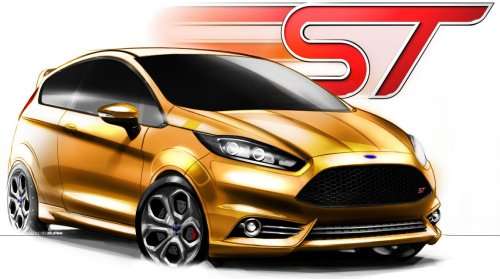 Yesterday we brought you a look at the lineup of customized 2012 Ford Focus models coming to the Ford display for the 2011 SEMA Show and today, we get a preview of the smaller Ford Fiesta hatchbacks headed to the huge Vegas convention – including the first good look at the new Fiesta ST Concept at a major US-based event.
Advertisement

The Ford Fiesta ST Concept made its debut last month at the Frankfurt Motor Show in Germany, fitted with similar performance and styling cues that we have seen from the production ready Ford Focus ST. This includes a sportier body kit, unique ST level wheels wrapped in performance tires, a sport tuned suspension and an upgraded 1.6L EcoBoost 4-cylinder that forces out somewhere in the area of 180 horsepower. One of the most interesting aspects of the Fiesta ST that debuted in Frankfurt was that it was based on the 3-door model that is not currently available in the US so will we see the European 3-door concept car or will Ford build a Fiesta ST 5-door concept for the US market? We will known in a little over a week. Click here for a closer look at the Fiesta ST Concept that debuted in Germany.

In addition to that factory-built high performance Ford Fiesta, the Ford Motor Company display at the 2011 SEMA Show in Las Vegas will feature a look at some modified Fiesta 5-doors courtesy of some well known tuners including M2 Motoring, Gold Coast Automotive and Aaron Vaccar.

A preview of the Ford Fiesta show cars coming to SEMA:
2011 Ford Fiesta by M2-Motoring – M2 Motoring dresses up the Ford Fiesta by adding a 3dCarbon body kit and roof spoiler finished in bright purple and carbon fiber. Next, the handling was improved by adding a big brake kit and coilover suspension system as well as the unique wheels while a cold air intake and exhaust system improves the power output. Finally, M2 beefs up the interior with a high end sound system complete with flip down touch screens.

2011 Ford Fiesta by Aaron Vaccar Signature Series – Finally, young automotive customizer Aaron Vaccar has added his Signature Series spin to the new Ford Fiesta. This begins with a big brake kit (seemingly a SEMA must-have) tucked behind 17” race wheels while a Weapon R cold air intake helps the motor breathe. On the outside, the only major changes are the unique paint scheme and the black wheels while the interior benefits from a set of race style bucket seats and a high end stereo system.

Check out the gallery on the right for a closer look at the modified Fiesta models coming to the 2011 SEMA Show and stay tuned for more SEMA previews leading up to our coverage of the incredible Vegas convention!

Other SEMA News:
The new Ford Focus to have a heavy presence at SEMA 2011
Ford could debut a new 1964 Mustang at the 2011 SEMA Show
Chip Foose and WD40 to unveil new charity car at SEMA 2011
Kia teases their 2011 SEMA Show vehicles
2012 Hyundai Veloster Gets Twin-Scroll Turbo and More for SEMA 2011