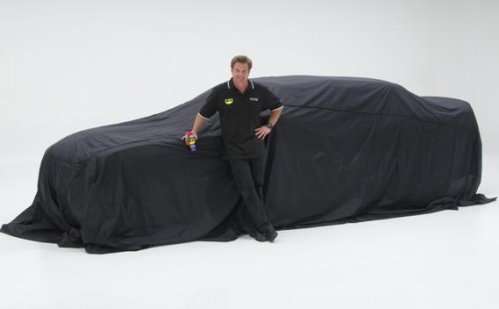 The folks at WD40 have worked with the SEMA Cares group each of the last two years to build show cars-turned-Barrett Jackson Auto Auction vehicles, raising over $275,000 for children’s charities and this year, WD40 has worked once again with the companies of SEMA Cares along with automotive design legend Chip Foose to create an ultimate sports car.
Advertisement

The 2011 SEMA Show marks the third year that WD40 has partnered with the many companies under the SEMA Cares charity group, with the cooperation accounting for unique WD40 themed muscle cars in 2009 and 2010. The 2009 WD40/SEMA Cares project car was a Chevrolet Camaro SS that raised $75,000 while the 2010 WD40/SEMA Cares joint effort was a new 5.0L-powered Ford Mustang GT that helped raise a whopping $200,000 – amounting to over $275,000 going to benefit the Victory Junction Gang and Childhelp (click either charity name to learn more about those programs).

This year, WD40 and SEMA Cares have joined forces with television star/automotive legend/SEMA Show regular Chip Foose to design and build the next exciting custom sports car to benefit these children’s charities. However, this year the base vehicle has been kept secret so all we know about the car covered in the image on the right is that it is a “sports car” and exactly what is under the sheet will not be known until the vehicle is unveiled on November 1st in the Grand Lobby of the Vegas Convention Center.

Considering that WD40/SEMA Cares team has picked a Chevrolet Camaro and a Ford Mustang in previous years, conventional wisdom would leave you to expect to see a Dodge Challenger but is the vehicle under the cover behind Chip Foose shaped like the brawny Challenger? The low roofline looks to me like a convertible with the top down and the windows up..with an oddly flat roofline. If nothing else, it certainly doesn’t appear to be shaped like any factory-built Dodge Challenger. The way that the front fender lines peak under the sheet and the short trunk area lead us to believe that this could be a new Chevrolet Camaro Convertible but with the wonders of Chip Foose’s designs – the basic shape could very well be deceiving. Feel free to comment below on what you think is under the cover.

**UPDATE**: I had a chance to speak with someone representing the WD40 brand and they explained to me that the car under the cover with Chip Foose is NOT the actual car that will debut at SEMA but instead, a "stand in" vehicle...leaving us all to keep on wondering what we will see on November 1st. What we do know is the full list of build partners who had a hand in the production of the 2011 WD40/SEMA Cares project car which includes the following companies:
WD-40 Brand
SEMA
Street Scene Equipment
Advanced Clutch Technology, Inc.
Barrett-Jackson
BASF Paint
Cie Games
Foose Design
Hotchkis Suspension
Katzkin Leather
K&N Filters
Lanzini Body Works
Magnaflow Exhaust
MHT Wheels
Pirelli Tires

In any case, we know that for the third year in a row, the folks at WD40, Barrett Jackson Auto Auctions and the SEMA Cares group of automotive companies will work together to help raise money for children’s charities. Adding the design and build talents of Chip Foose could only serve to increase the value (and awesomeness) of this secret project car and in less than two weeks, we will have witnessed the unveiling of this new custom sports car in person.

TorqueNews will be at the 2011 SEMA Show, bringing you all of the coolest cars and hottest products of this year’s show. Bookmark us and check back regularly as previews of SEMA 2011 continue to trickle out, just 12 days ahead of the opening of the show.

GuadalupeFansel wrote on November 2, 2011 - 6:13am Permalink
To build a car show that will collect funds for charities is a good thing for everybody. For this year, many car enthusiast will be looking for the <a title="Details on Chevrolet Camaro ZL1 slowly emerging" href="http://www.cardealexpert.com/news-information/auto-news/camaro-zl1/" rel="dofollow">Chevrolet Camaro ZL1</a> on this event. I heard this car is a new high-powered version of the Chevrolet Camaro and expected to be a real screamer.