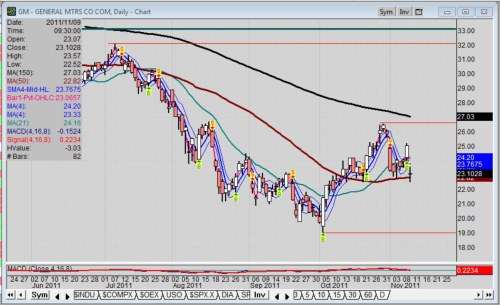 This is a classic case of buy on rumor, sell on the news, as General Motors Company (NYSE: GM) stock took a dive after beating quarterly earnings estimates. Question is, what factors are affecting GM stock price dynamics?
Advertisement

Commentators like CNBC’s Jim Cramer, who is in Rochester, Michigan for the Republican debate tonight, assume the fall in GM stock is likely due to forward looking statements about the company’s expectations in Europe. Fact is, GM sales will be highly affected by more than just Italy’s bond problems breach above the 7 percent level.

According to MarketWatch articles, the dollar gained ground Wednesday against the euro which fell sharply after Italian government bond yields spiked higher. Fears were raised as the euro zone’s third-largest economy could need a bailout.

The euro then tumbled to $1.3631, down from $1.3836 in North American trading late Tuesday. Then the euro received a lift after Silvio Berlusconi promised to step down as Italy’s prime minister pending parliamentary approval of new austerity measures and structural reforms.

Then, as usual amid any currency ruckus, risk-averse investors moved to the perceived safety of the U.S. currency.

Many may not realize that GM no longer builds its volume in America anymore. For the record, according to the Quarterly Report on Form 10-Q, in the nine months ended September 30, 2011, 72.0% of GM vehicle sales volume was generated outside the United States, including 42.6% from emerging markets, such as the BRIC nations, Brazil, Russia, India and China, which have experienced the industry's highest volume growth.

That automatically places GM at the mercy of non-U.S. economies; and the stockholders and traders are moving their money accordingly.

According to the WSJ report, GM's North American unit has become a reliable money-maker since the company's 2009's bankruptcy. No argument there as sales have been up, costs are down and consumers are paying higher prices for cars and trucks.

Regarding earnings, analysts had expected 96 cents a share. So, when GM reported a profit of $1.73 billion, or $1.03 a share, that was great news; that is, until you compared it a year ago, whereby earnings were down from $1.96 billion, or $1.20 a share from a year ago.

Then came the forward-looking interpretation of recent events. General Motors said Wednesday that its third-quarter earnings fell 12% as the auto maker's operations outside of North America struggled to get traction. Couple that with the recent news about Italy and you can see the concern.

Even the sales/trading statement call on Nov. 1st by GM stated an element of caution with the words, “Now we all know what the risks are, both here at home and on a daily basis on and off in Europe, which is why you've heard the company inject another caution when we talk about 2012.”

Truth of how investors really feel, though, is what really counts. Eventually those feelings make their way into the stock price, whether the company admits caution or nor. So, this morning those feelings were expressed by selling off GM stock at the open. In fact, GM stock fell on the open from yesterday’s close of 25.04 to 23.07.

On a technical basis, GM stock had jumped into a bullish spurt since the low of 19.05 on 10/4. The swing high achieved in that spurt was 26.55, the highest price since early August when the stock was sliding downward toward its book price below 20.

In the case of GM stock, major support is at the 19.05 low which was below the previous quarter’s book price near 19.57 as reported by MarketWatch. With a new earnings report, we’ll see if the book price gets revised at all.

I did notice, though, the valuation at MarketWatch has GM trading at 2.14 price to book. That’s a far cry different than what was reported by MarketWatch last quarter which stated a ratio closer to 1.12; and I recorded the book price at 19.57 from them a few months back. So, does that mean this new book valuation is now somewhere around 12? Something is wrong or out of date. I’ll research that further to get an update.

Still, we have support and resistance based on recent trading which is what really counts in the hearts and minds of many traders. On the upward resistance, that recent swing high of 26..55 looks firm until further notice. So, on a technical basis, that defines the upper and low trading channel for GM stock until traders deem otherwise.