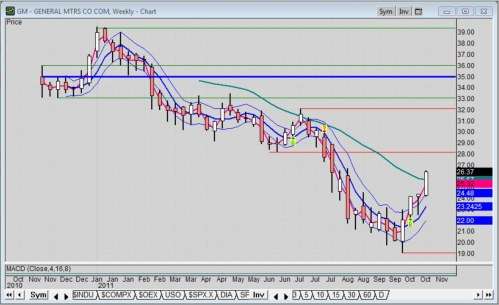 GM stock finally breaks out of its mean bear mode

General Motors Company (NYSE: GM) stock hit its book price a few weeks ago, but now has turned some kind of corner by breaking out of its 4-week high-low channel as well as its 5-day high-low channel. Questions are, now with its close today at 26.33, how long and how far might GM stock run? And will GM stock retest that low?
Advertisement

Noentheless, the weekly chart shown give the braod view of GM stock since its IPO in November of 2010. Yes, it's one-eyear IPO anniversary is coming upon us.

Time will tell how far and how long this latest drive will go, though, as GM stock has also been affected by a breakout of the general market in response to some better news in Europe. Question is, is this the rising tide that raises all ships scenario? Look out below, though, as America has its own future debt to worry about.

In the meantime, GM stock has now broken out twice out of its own 5-day high-low channel; and that for me is short-term bullish. Anytime the lines track from lower left to upper right in time, that’s a bullish trend bias.

Some might say the market move likely started when S&P raised GM’s credit rating in direct response to the company's new four-year-labor deal with the UAW. It doesn’t get much more fundamental than that. Question at that time was and still is, will it make much of a difference to the present stock price in light of overwhelming economic conditions affecting the entire auto stock sector?

For the record, the heavy weight of the European debt situation has held almost all of the auto sector stock hostages for many months. As of this morning, though, some of that has been addressed and alleviated, at least in the minds of some market goers.

Still, fact is, S&P said it was upgrading GM's corporate credit rating two notches, from “BB-” to "BB+"; and it revised GM's outlook for future ratings to stable from positive. An investment-grade rating is important, because it substantially lowers the auto maker's borrowing costs.

While Ford and GM still carry a significant amount of debt, GM definitely holds the advantage because it cleared much of its bond debt via bankruptcy, while Ford opted not to go through that process. Also for the record, both companies have under-funded pension obligations.

Many want to believe like S&P that the new GM contract "will allow for continued profitability and cash generation in North America." The credit rating agency also noted GM has a two-year track record of profits and cash-flow generation in its global automotive operations, supported by a strong performance in North America.

Now let’s look at this GM stock without blinders. It’s no surprise that GM stock has not fared well since its IPO in November, 2010 which opened at 33. In fact, GM stock recently traded at or near its book price of $19.67 as defined by MarketWatch, and traded even lower to set a post-IPO low of 19.05. Now, as 19.05 becomes price support, it is propped by its proximity to the book price which makes it stand out more.

See, I do use fundamental data after all. Nevertheless, as reported here at TN, all auto sector stocks have been wagged by general market forces and their reaction to the sovereign debt issues in Europe as well as America which still have the potential to downgrade the entire world economy.

For now, though, upside resistance may be found at 28.16 and 32.08. I have no positions in GM stock at the moment, but had been watching it for an entry, but got sidetracked with a great gold trade entry.