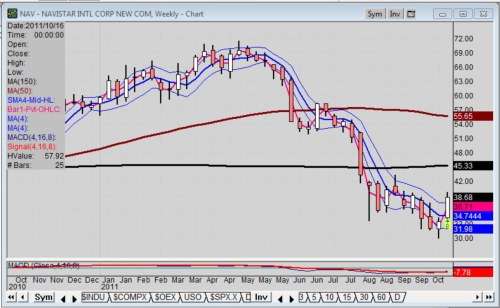 Carl Icahn stakes his claim on Navistar, stock rises after hours after market down day

Navistar International (NYSE: NAV) stock was on the rise after-hours Thursday after activist investor, Carl Icahn, disclosed a 9.8 percent stake in the company. Was his decision based on technical or fundamental analysis and its report at 2011 DEER conference in Detroit?
Advertisement

Navistar International (NYSE: NAV) officially stock closed in New York at 38.68 but rose in after-hours trading to close at 41.80 by 7 p.m.

According to release documents, Icahn’s firm did not hold shares at the end of the second quarter ending June 30, 2011, but now owns 7,111,426 shares or 9.8 percent of the total outstanding shares.

Per Icahn's own website, http://www.icahnreport.com/ Carl Icahn is a billionaire financier, ranking #18 on the 2007 Forbes 400 list with an estimated net worth of $14.5 billion.

Icahn, also a favorite of CNBC Fast Money panel member, Karen Finerman, noted he acquired the shares in the belief that they were undervalued at current levels. This is a buy-low, sell-high scenario much like Warren Buffet, except Icahn might be viewed as taking his profits much more often.

This wasn’t based on technical analysis either, as Icahn is a more fundamental-based fund manager. He indicated he also had conversations with management and will likely seek to have additional conversations.

Icahn often plays the board member card a lot. After all, he commits a lot of money to his stock picks and wants a say. So, the probability is high that he discussed the possibility of adding a person suggested by Icahn to the Board of Directors, although no agreement has been reached or dislosed.

That makes Carl Icahn number 4 on the list of notable holders of Navistar International stock, according to street insiders.com Ref: Holdings in Navistar

For the record, I recently reported on Navistar’s appearance at the 2011 DEER conference just last week. As the recipient of funds from the Department of Energy (DOE) to develop the truck of the future called SuperTruck, Navistar was reporting on its progress. Read: Navistar reports Super Truck accomplishments at 2011 DEER Conference

As you can tell from the weekly chart, this is the first time in many months that Navistar stock has closed above its 4-week high-low channel. Question is, will Friday’s close establish the signal and cement the trend bias to bullish.

Be apprised this occurred on a day when the general market closed down. Of course, when the big gorilla funds take a position, the stock bulls overcome the bear sellers; and, if there were any short positions before today’s announcement, they just got crushed; thus exacerbating the bullish move.

Today’s normal-hours close for NAV was 38.68, the second day in a row that the stock closed above its 50-day moving average; and that’s significant to technical analysts like me. That latest bull move actually started on Oct 6th via breakout above the 4-day high-low channel.

Perhaps this news about Icahn leaked out then; and that is why many traders buy on rumors, and sell on news. The morning open will determine if the after-hours trend will hold. Question is, do you believe in the fundamental story of Navistar?

In my opinion, based on what I witnessed at the DEER conference, Navistar is ahead of the curve when it comes to the next evolutionary stage of large, class 8 truck technologies.