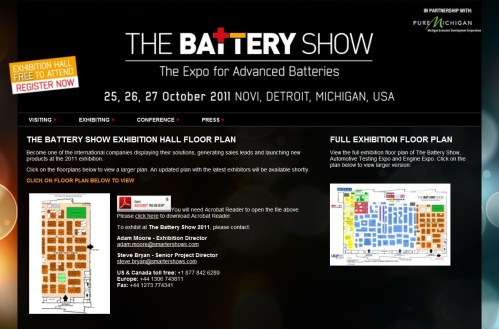 With government subsidies giving the initial impetus to the EV (electric vehicle) market, the auto industry and a host of suppliers are set to drive the market beyond the near-term with The Battery Show 2011 in Novi, Michigan.
Advertisement

Its two-track business and technology conference examines battery-market development and opportunities, including how technical advances are likely to impact performance, safety and cost. The Battery Show first launched in 2010; and is produced by United Kingdom-based Smarter Shows.

In the forefront of everyone’s mind is how long the government subsidies will support the industry. Thus with the world on the brink of the next elevel of economic chaos, significant reductions in battery cost are imperative for the industry to grow to the $14.6 billion and 28 million kWh market that Pike Research forecasts by 2017.

According to Pike Research, nearly half of the demand is likely to come from Asia, led primarily by China. Europe and United States are likely to constitute 25% and 21% shares respectively.

Fact is, there are currently more than half a dozen battery chemistries with unique properties for power, energy density, and life cycle performance that are being commercialized. While there is no chemistry that emerges as the clear winner, the tradeoffs in the various properties define the differences.

Looking forward, initial indications point to a greater interest in the lithium-iron-phosphate chemistry in the years to come due to its superior performance characteristics coupled with increased safety.

Even beyond that, this writer has uncovered much research in place developing zinc-air batteries, whereby zinc is more plentiful in the earth that lithium.

Other areas under development include new chemistries for ionic fluids. These allow for greater stability under faster charging at higher voltages, whereby they resist breaking down.

More about The Battery Show

According to the news link provided by The Battery Show for the Detroit News, this show used to be in San Jose, California. The reason it was moved to Metro Detroit this October and in 2012 is that organizers decided they wanted to be closer to the heart of the battery systems and electric vehicle industry. As someone born and raised in Detroit, it surely makes sense!

The three-day show will feature up to 160 exhibition booths on electric vehicles, utility storage and more, and is expected to draw more than 3,000 people at the Suburban Collection Showplace in Novi, up from about 1,400 last year in California, said Adam Moore, exhibition director for "The Battery Show."

According to the Michigan Economic Development Corp. it is the largest battery show of its kind in the nation.

Torque News Will Be There

Patrick Rall and me (Frank Sherosky) will be covering the show for Torque News. Already, I have technology interviews set up including one with Controlled Power Technologies (CPT), booth E349 in the Engine Expo section. Expect us to tweet from there.