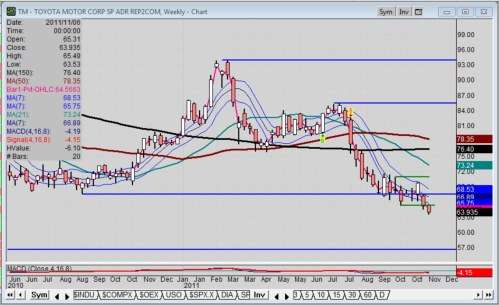 The weekly chart of Toyota stock proves the dynamics of price do not lie, as the bearish fundamentals and problems of Toyota Motors hang on.
Advertisement

Who knew that the cheaper labor of Thailand would be offset by the weather? Problem is, this weather is cyclical as monsoon rains return every year; but this year produced floods not seen in many decades.

Recall it was just three weeks ago when Toyota Motors (ADR:TM) stock was trading over $69. Now it’s still treading water at the $64 level as the week draws to a close.

Good news for Toyota is, the company announced a return to production due to the floods near three Thai assembly plants. It will take time, as many plants were scheduled to be kept off-line through Nov 12th.

Fact is, any part disruption will affect plants all over the world, mainly in Japan, North America and Southeast Asia.

Elsewhere in the economic world, Toyota stockholders have had to deal with the general market sell-ff from the Greek problems and now Italy which might drastically affect European sales.

So, where should traders look for support for Toyota stock at this point? Recall that major support from 2010 at 67.57 has been broken and retested for weeks now. The next level of major support dates back to the lows of late 2008 and early 2009 which stands at the 57 level.

Per the last TN report on Toyota stock, it’s still up in the air whether TM will test that level. Any good news can surely drive TM higher, but the economic conditions will likely act as a heavy burden.

For those inclined on buying Toyota stock at a discount, one strategy is to sell a lower, out-of-the-money put option for income. In that that manner you get paid to wait until the stock drops to that lower strike price. Just be apprised there's quite a distance to that next support level; meaning, getting filled now is no guarantee you will avoid any further drawdown.