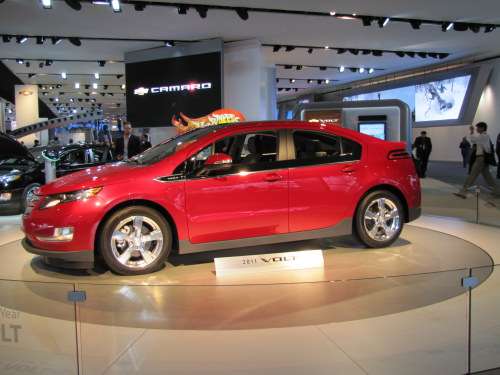 Unlike companies that try to hide and make excuses, General Motors (NYSE: GM) laid bare its details about the preliminary evaluation of Volt battery assemblies, and defined de-charging the battery as a new safety protocol to any post-crash event.
Advertisement

Making every effort to be open, GM went the extra mile today by holding the news teleconference regarding the NHTSA inquiry into the battery safety issue with the Chevy Volt. Mark Reuss, president, GM North America and Mary Barra, senior vice president, Global Product Development were literally on the hot seat from questions by the media.

For the record, GM’s “moon shot technology” with the Chevy Volt is under close scrutiny by the NHTSA regarding its safety after a fire that occurred, not immediately, but literally weeks after a severe crash. Fact is, the test occurred in late May, 2011, but the fire did not occur until early June, and that while the vehicle was in storage by NHTSA.

The agency officially advised GM on Friday that it would open a preliminary evaluation of Volt battery assemblies after NHTSA test results caused electrical fires up to three weeks after an initial vehicle New Car Assessment Program side pole crash test.

Mark Reuss, president, GM North America, said the company would take every precaution to assure the driving public of GM’s commitment to the safety of the Volt being handled after a severe incident and the total satisfaction of everyone who owned one.

Most important was the fact Mary Barra said such electrical fires had not occurred on public roads and NHTSA was not investigating any such potential imminent failure on the roads.

According to the news release that accompanied the news teleconference, the initiatives follow six months of research and testing in the United States with the National Highway Traffic Safety Administration (NHTSA) designed to induce electric vehicle battery failure after severe crash situations.

GM’s Mary Barra also noted, “If the batteries had been fully de-charged, the event would not have occurred.” The media questions, however, remained heavy about the details of the fire events.

Question now is over how to deal with the battery after a severe crash, but GM seems to have a solution defined. For the record, the car itself has a five-start safety rating. To allay any doubts, though, GM is contacting all owners of the Chevy Volt which underlines its commitment to its customers..

According to Mark Reuss, “The Volt is the future; and the future is just beginning.” He also stated, “My daughter drives the Volt everyday with two kids in it.”

Mary Barra then added again, “The Volt is a safe car.”

When questioned by CNBC, Joel Ewanick noted that sales are not being suspended, but new shipments will await completion of the safety protocols.

Another question came in about the coolant. It was then stated that it is premature that the coolant may have been the root cause, but electronic controls seem to be part of the investigative focus by both GM and NHTSA. Based on the statements thus far, de-powering or de-charging the battery after a severe crash seems to be the order of the day until further notice.

Point is, a severe side-pull crash test placed the test vehicle in a compromising position, then it became worse when the vehicle was stored with a charge still left in the battery. That was before any protocols were fully established or they were missed.

NHTSA also simulated the event on a post-crash battery in its lab. The purpose was to define any issues and safety requirements after a severe crash. NHTSA and GM both learned from the event. In fact, Barra said the GM team would continue to work closely with NHTSA, suppliers, dealers and manufacturing teams to initiate any necessary changes as soon as possible.

As with any new technology, safety learning can be an ongoing event in itself. Furthermore, battery safety isn’t just a Volt issue, but one within the industry. Reuss and Barra both noted there must be an industry protocol regarding any EV battery.

“We’re working with NHTSA”, said Barra, “so we all have an understanding about these risks and how they can be avoided in the future. This isn’t just a Volt issue. We’re already leading a joint electric vehicle activity with Society of Automotive Engineers and other automotive companies to address new issues, such as this protocol of de-powering batteries after a severe crash.”

Tesla Giga Berlin's New Hurdle: It's Not Only the Gov't, but Now Tesla Itself
Teslas Are Sold Out Until 2023, But The Timing May Reverse
END_OF_DOCUMENT_TOKEN_TO_BE_REPLACED