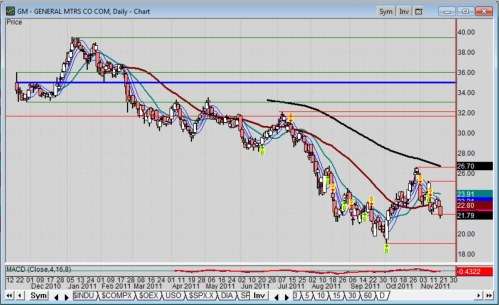 Stock price dynamics as told by price-time charts do not lie. Today, General Motors Company (NYSE: GM) stock followed the direction of the general market by moving lower; but in the GM stock’s case, took a dive past price support one day before Option expiration Friday.
Advertisement

It's the night before option expiration, and all through the house, no traders are stirring, not even a mouse. Now look at the daily chart to your right. Question is, will General Motors Company (NYSE: GM) stock follow the general market lower tomorrow, on Friday as option expiration wields its power on volatility?

Commentators on CNBC’s Fast Money noted tonight that GM stock may have followers with high expectations, but Ford Motor Company (NYSE: F) looks more like a better buy. Well, that is their opinion.

It doesn’t seem to matter much what individual thoughts are or what the fundamentals are. Most stocks follow each other in a herd-like fashion; and that mentality is being influenced heavily by Europe and the U.S. Super Committee’s problems with reaching an agreement on the national debt.

Last week I wrote that GM sales will be highly affected if Italy’s bond problems breach above the 7 percent level. Now we have Spain having problems selling their bonds. Looks like not much has changed on that front.

Bottom line for traders today was, everyone had problems (me included), unless you were well covered in put options. Even the gold ETF, GLD, took a major hit; albeit the trend is still up.

GM Stock Responds to the Downside

Despite the good showing by GM at the LA Auto Show with the Chevy Sonic, Chevy Spark, Camaro ZL1 and the Cadillac XTS, realize that GM no longer builds its volume in America anymore. Fact is, according to the Quarterly Report on Form 10-Q, in the nine months ended September 30, 2011, 72.0% of GM vehicle sales volume was generated outside the United States, including 42.6% from emerging markets, such as the BRIC nations, Brazil, Russia, India and China, which have experienced the industry's highest volume growth.

That automatically places GM at the mercy of non-U.S. economies; and the sovereign debt situation as well. Recall that General Motors said last week that its third-quarter earnings fell 12% as the auto maker's operations outside of North America struggled to get traction.

As I’ve written many time before, though, how investors really feel is what really counts. Eventually those feelings make their way into the stock price. So, this morning’s response were expressed by selling off GM stock right at the open and holding that trend bias into the close.

On a price-dynamics, technical basis, GM stock had jumped into a short-term bullish spurt since the low of 19.05 on 10/4. The swing high achieved in that spurt was 26.55, the highest price since early August when the stock was sliding downward toward its book price below 20, at least that was the number I found at MarketWatch at the time.

I noted last time that where GM stock would trade from there was anyone’s educated guess. I also noted that traders look to the tape to find price support and resistance whereby traders will likely buy or sell; and if those levels are broken, then the trend bias will be defined.

Three major factors affect my scenario of possibilities this week for GM stock: Factor #1 is, Friday is option expiration; meaning stocks often tank into the close. As such, stocks often rise higher the following Monday.

Factor #2 is, GM stock has broken support at 21.93. Certainly, one day breakage requires at least another day of confirmations, but that assessment is blurred by the Factor #1.

Factor #3 is, GM stock has major support at 19.05; and the recent rupture past support indicates high probability of at least testing that 19.05 level. However, be apprised on Factor #1 again, that option expiration has the potential to affect where GM stock closes.

So, until the charts tell us something new, all we have are support and resistance as targets based on recent trading, which is what really counts in the hearts and minds of many traders. On the upward resistance side, that recent swing high of 26.55 is still intact; but if GM stock falls deeper toward the 19.05 level, then the recent broken support at 21.93 becomes overhead resistance at least in the short run.

As usual policy here at TorqueNews, I do not recommend stocks. I merely report on the fundamental news that I do not control, and the technical effects of price dynamics which I also do not control. All you can do is make your best judgments on GM stock using this information and any other information that you may find pertinent.

I’ll report again after option expiration is complete. At least that factor will be taken off the table. Moment of truth and confirmation will be Monday’s trading, though.